Socceroos great John Aloisi says if Ange Postecoglou completes his move to Celtic it will open doors for Australian coaches and players.

Ange Postecoglou's expected move to Scottish powerhouse Celtic shapes as a game-changer for Australian coaches and players, according to Socceroos great John Aloisi.

Postecoglou has reportedly agreed to verbal terms with Celtic and is expected to soon leave Japanese club Yokohama F.Marinos.

Aloisi backed the decorated former Socceroos manager to shine in Scotland - and open doors in the process.

"It's massive for Australian football in general ... not only Australian coaches but Australian players," Aloisi said.

"I remember when I first went over to Europe, there wasn't that respect factor there and then we had to gain it and earn it and then we went through that really good period.

"It's a bit like that at the moment that they're not trusting Australian players.

"But if Ange does go to Celtic, which I'm hoping and praying he does, he will open the doors because people will have to trust in Australian football again.

"Because I'm sure if he does go there, he'll do well, there's no doubt about it. Ange, wherever he goes he does well and it's exciting."

Aloisi expected Postecoglou's trademark playing style to come to the fore, albeit with adaptations to the Scottish Premiership, which he noted was quicker than the A-League and J1 League.

"I think Ange will enjoy that as well because he likes his teams to play quick football and attacking football, so it's exciting," he said.

"... Brendan Rodgers (was) very similar in the way he got his teams to play when he was at Celtic.

"So I don't see that they can't do it or they won't be comfortable in doing it. I think that they'll relish it and really enjoy that style as well."

UEFA have reportedly received an application from Celtic to have Postecoglou granted an exemption to coach without a UEFA Pro Licence as his AFC badges don't meet the governing body's criteria.

It's a situation that was faced by former Melbourne Victory coach Kevin Muscat, who along with Tony Popovic recently had an ill-fated stint at a European clubs.

"There have been mixed results, but I've got no doubt that if Ange does well, that it will help other Australian coaches," Aloisi said.

"It's exciting. I think we've got a good group of coaches in Australia and that they just want the opportunity and a little bit of patience, sometimes, when they do get the opportunity." 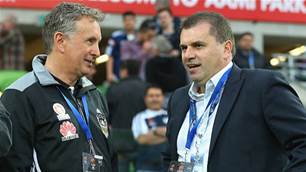