Brighton & Hove Albion manager Graham Potter says Aaron Mooy needs to be patient to get regular game-time at the Seagulls.

Mooy has had limited time on the field since swapping Huddersfield Town for Brighton last month.

The Socceroo started at left wing in the Seagulls' 0-0 draw with Newcastle United on Saturday.

He played for 70 minutes before being replaced by Aaron Connolly.

Potter has been pleased with the Australian's impact at the club, but admits it will take time.

"He’s been a little bit unfortunate from a tactical perspective," he told the Brighton & Hove Independent.

"There hasn’t necessarily been a place from Davy or Dale in the two-man midfield. But he adds another quality in that midfield area, keeps the ball well and can go and add a goal threat from midfield.

"He’s been working away well, he came late at the back end of the window so sometimes it’s not so easy to get into the starting XI.

"But he’s worked perfectly with the group and works hard every day, so I’m sure his opportunity will come.

"He’s quite an experienced guy. He knows his situation. When he came in, we had done a lot of preseason and it was quite late in the window. That’s the downside with that sort of move.

"You have to keep patient, keep training and keep waiting for your opportunity and then football decides when you should play."

Mooy has made three appearances in the Premier League and one in the EFL Cup for Brighton.

The midfielder joined the south coast side on loan, but there is both a recall clause and an pre-agreed transfer fee in the structure of loan deal.

Potter said: "There’s a lot of football to be played until we make any decisions.

"The most important thing is he enjoys his football here and we can allow him to express himself on the pitch and be himself." 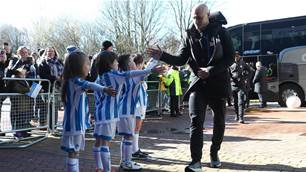 Siewert: Why I left out Mooy