The last of the Asian Cup Round of 16 matches took place overnight with Korea scraping past Bahrain 2-1 in extra time and Qatar overcoming Iraq 1-0.

Korea and Qatar will now meet in the quarter finals after a wonderful free kick by Bassam Al Rawi (62’) was enough to grab the win over Iraq.

Qatar’s Spanish coach, Felix Sanchez went with the same starting line up as he had chosen for the last two group matches. Iraq’s only change from the goalless draw with Iran was Bashar Resan replacing Ahmed Yasin in midfield.

Qatar was soon threatening Iraq’s goal and in the fourth minute Boualem Khoukhi’s ball across the box found Abdelkarim Hassan unmarked at the far post but his volley across the face came back off the crossbar.

Iraq gradually got into the game and had a chance to take the lead in the 23rd minute. A mistake by Akram Afif gifted Mohanad Ali a one-on-one chance against Saad Al Sheeb but his second touch was too heavy and he ended up being booked when his trailing leg caught the goalkeeper in the face.

Six minutes before half-time and Ahmad Ibrahim’s header from a corner produced a straight forward save for Al Sheeb, only the fourth effort on target against Qatar in the entire competition.

In added on time in the first half left back Abdelkarim Hassan hit the woodwork for the second time after his attempted cross was deflected onto the post by Ahmad Ibrahim.

The first real opportunity of the second half should have given Qatar the lead. An awful back header by Alaa Ali Mhawi fell into the path of Akram Afif, but, just like Mohanad Ali in the first period, his touch was far too heavy allowing Jalal Hassan to collect the ball.

It took a moment of class to split the sides. When Qatar’s captain Hassan Al Haydos found Akram Afif in space, he was brought down 25 metres out. Al Rawi stepped up and curled the free kick over the wall and into the bottom left corner giving Hassan no chance to get across to make the save.

The dead ball specialist had scored Qatar’s opening goal in the tournament with a similar free kick in the 2-0 win over Lebanon.

Instead of trying to hold on to their lead, the goal seemed to spur on Qatar. Hassan was busy again keeping out shots from Hassan and Abdulaziz Hatem.

Having finished the first half as the stronger side, Iraq had barely threatened during the second period but they finally found some urgency with Ali Adnan almost matching Al Rawi’s effort with a free kick that curled just wide of the near post.

With 10 minutes to go, another header by Ibrahim went just as close to the other side of the goal.

Encouraged by most of the crowd of 14,701, Iraq kept pressing for the equaliser and came close when Ibrahim guided a header through to Mohanad Ali but he was unable to make contact as the ball got away from him – and with it, Iraq’s place in the tournament.

Should Australia defeat host nation United Arab Emirates on Saturday morning then they will face the winners of the Qatar and South Korea clash in the semi-final. 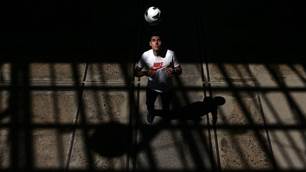