Western Sydney Wanderers recruit Simon Cox will take some time to adjust to the Australian weather after his first A-League game.

Western Sydney's newest recruit Simon Cox could be the missing piece to the team's attack after making an impact in his first A-League game in red and black on Sunday night.

The Irish international was introduced into the match against the Central Coast in the 58th minute, lifting the tempo with his quality around the box.

A goal in injury time polished off a dream debut for the the 32-year-old, who could complete the Wanderers' puzzle in 2020.

"I'm really happy for him, he's got real high quality that's going to help us a lot and he's been working hard since he's arrived and got his just rewards," said caretaker coach Jean-Paul de Marigny following the Wanderers' 3-1 in Gosford.

"He's still got a bit to do, he'll only get better and stronger and he's going to really affect the way we play."

Cox has spent just two weeks in Sydney since arriving the day of Markus Babbel's final game in charge of the side.

In that time he's been adjusting to the weather conditions and working closely with former EPL conditioning coach Andy Davies to acclimatise to Australia's summer.

De Marigny is hoping to increase Cox's game time in the coming weeks.

"He only arrived two weeks ago, he's still settling down in Sydney and it's a big city as we all know," de Marigny said.

"It's not easy for him and particularly the weather. Where he left was very cold and now it's very hot so it'll take a bit of an adjustment but he's fitted in well with the group.

"Acclimatisation is something that you need to go through naturally also. Andy Davies is our conditioning coach, he's got massive knowledge on that side so he's done a tremendous job." 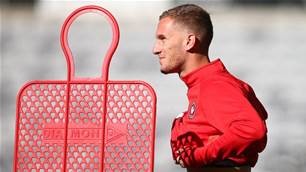 Wanderers call on Olyroo: 'Show us what his qualities are'