Western Sydney Wanderers and Sydney FC clash on Saturday in their first A-League derby at Bankwest Stadium with the winner to go outright first.

REASONS TO GET EXCITED ABOUT THE SYDNEY A-LEAGUE DERBY

* Wanderers might actually have a chance of winning. Everyone and their dog seems to know Wanderers have won only one out of their last 17 competition matches against Sydney, Consecutive wins, the successful integration of some new recruits and evidence of a steely resolve not seen last season suggests Western Sydney could enjoy some derby joy on Saturday

* Watching ex-Wanderer Alex Baumjohann up against his old side. The skilful German playmaker was cut by Western Sydney after one injury interrupted season and would surely like to shine against his last employer.

* And while we're on the subject of German players....Wanderers fans didn't see the best of an underdone Alex Meier on his debut, but the former Bundesliga sharpshooter scored with a classy finish last week and his improving fitness could cause problems for Sydney.

* Siblings lining up on opposite sides. It's happening after just three rounds, but family bragging rights go on the line, with brothers and defenders Ryan and Dylan McGowan playing their first A-League game against each other for the Sky Blues and Wanderers respectively.

* Top spot up for grabs. No extra incentives normally needed for a derby game, but if either side wins it will go outright first.

* Pump up the volume. Whatever the outcome the first Sydney derby at the rebuilt Bankwest Stadium is certain to rock the joint and produce a special atmosphere with a capacity crowd expected . Corica: We totally dominated that game The real Baumjohann set to shine in derby 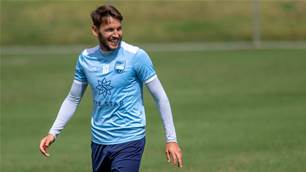