Liam Reddy says Perth needs to tighten up its defence if it is to have any hope of securing a top four spot in the A-League finals.

The Glory have conceded 35 goals this season, averaging 1.94 a game. It's a record that puts them on par with Central Coast Mariners, who have also conceded 35 goals, as the worst defence in the competition.

"Too many goals have been conceded to be honest. If we're any chance of coming in the top three or four, and winning the grand final, we need to keep cleansheets," the goalkeeper said.

"I think we've only got one to date so that's something we're really going to work on this back end and work on our defensive structure. Obviously doing the right things defensively first, but that's something we've got to do on the training park and hopefully take into the weekend.

"We just need to cut that out if we're going to any real chance of getting a home semi-final and obviously win the A-League."

The Glory notched a crucial 3-2 victory over Newcastle on Saturday. Reddy, who watched from the stands as he served a one-game suspension, was pleased with the result.

"It was a much-needed three points and it puts us back on track," the 35-year old said.

Perth head to Adelaide to meet the out-of-form Reds on Friday night. Despite the defending champion's troubles this season, Reddy said his side can't afford to be complacent.

"They're obviously struggling but on their day they can produce a performance and we know we have to be at our best to beat Adelaide on Friday," the keeper said. 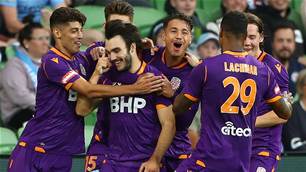 'Some people call it lazy...' - but D'Agostino's as fit as a fiddle now