Allowing more foreign players into the A-League is "ridiculous" and will threaten the survival of some clubs, veteran coach Ernie Merrick says.

Merrick says the gap will increase between cashed-up clubs and financial battlers if the number of visa players rises.

A-League clubs are allowed a maximum of five visa players but there's a push to increase that number.

Merrick, who has coached in the A-League in all but one season of the competition since its 2005 inception, says the number of foreigners should be reduced.

"I would prefer that we're down to four to give more Australian players an opportunity," Merrick said.

"But not five, six, they're talking about going up to seven I think - that would be ridiculous for us, the development of Australian football.

"We don't have the finances, and I'm talking about any club in the A-League really, to bring in top quality players to make up the teams.

"If you're in the English Premier League you can do it, or in La Liga or in Germany and then you can bring in lots of visa players and the standard is very high.

"But we would be bringing in pretty low-class players. We would be better developing Australian players."

Merrick cited the scenario in his native country Scotland as evidence of the damage done by permitting too many foreign players.

"Hearts have got 30 senior professional players, 17 of them are foreigners," Merrick said.

"And you ask me why Scotland can't qualify for a World Cup any more? It's pretty blatant.

"Foreigners that are coming into Scotland are very low standard.

"And that would happen here. You can only afford one or two decent ones.

"If you had seven (foreign) players the big teams would just flood them if they could afford them ... most of the other teams wouldn't survive."

The Australian Professional Football Clubs Association is pushing for each A-League club to be permitted six foreigners.

The association is an umbrella body for clubs who will take control of running the A-League under changes to the competition's governance. 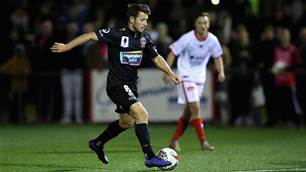 Hoolahan out to cool the Jets