The A-League Men says it salutes the achievements of Besart Berisha, the all-time top scorer who's just announced his retirement from the game.

Besart Berisha, the feisty striker who scored more A-League goals than anyone, has been saluted on his record-breaking career following his retirement announcement.

The Kosovo and Albania international, whose 142 goals in 236 A-League appearances for Brisbane Roar, Melbourne Victory and Western United still put him easily top of the goalscorers' pile, had broken the news on his Instagram account on Wednesday.

In an emotional post, the 36-year-old, who joined Kosovan club Prishtina last September after playing his last A-league match for Western last May, told his followers: "It's been an unbelievable time that I will never forget.

"I remember when I started this game I always had a smile on my face and today I am smiling again thinking of all the beautiful memories I had with the game!"

On its official Twitter site, the A-League Men responded: "We salute you, @BesartBerisha7 for what you brought to our game.

It accompanied the post with a quote from Berisha that read: "I know if I look back today that for sure I was annoying to players. I would love in one way to apologise. But then in another way, I don't want to."

Indeed, it was a typical refrain from the striker who many loved to hate with his theatrics and showboating that accompanied the insatiable hunger for goals which perhaps made him the league's best-ever striker.

Berisha won four A-League titles, shared between the Roar and the Victory, with whom he also won the FFA Cup, and he was twice the league's top scorer.

Prishtina were the last of a dozen teams that he turned out for in a 19-year career in seven countries.

"The moment I started this game to play I always dreamed to become a professional football player," he posted. 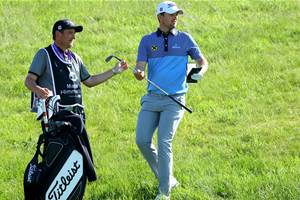 Bernd Wiesberger fired a final round 64 on Sunday to defend his 2019 Made in Himmerland title by five shots from Italy’s Guido Migliozzi. Here is what the Austrian had in his bag.