The Socceroos picked up their first point of the World Cup, drawing 1-1 to Denmark and they travel to Sochi next week to face Peru.
Risdon played 90 minutes in the opening two matches and was the only current A-League player to feature before Daniel Arzani was substituted on.
"I’m still on top of the world, it’s amazing to be playing at a World Cup coming from the A-League," the Western Sydney Wanderers fullback said.
"I’m loving every minute of it, soaking it all in.

"Players you play against at this tournament are the best in the world, so you’re testing yourself every game and hopefully we can keep it going in the next game.

"I thought I did my job well. It was quite tough, the winger there is very nippy and quick.
"As a whole we keep doing what Bert (van Marwijk) asks us to do, sticking to our game plan, it seems to work. Just probably the final ball in the final third is letting us down a bit. We’re getting there, but it’s just that last ball."
Risdon also felt the Roos were unlucky not to beat Denmark and was taking confidence into their game against Peru.
Australia must win against the Peruvians to have any chance of making the round of 16.
"We probably a bit unlucky, I thought we played really well. We dominated for most of the game, created a lot of chances, but we’ll take the draw," he said.
"There’s a lot to play for in the last game, we need to get a result in that one and hopefully that’s enough to progress.
"The way we’ve been playing has been very positive, the results haven’t been there, we need to get those results in the World Cup. Hopefully we can get it in the last game if we keep playing the way we’re playing.
"We started off slow, but we want to come out firing early because we need that result and hopefully we can get that." 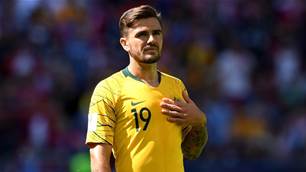 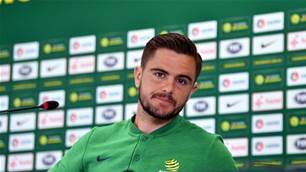 Risdon ready to put A-League ordeal behind him