Wellington Phoenix coach Ufuk Talay has slammed the decision to play on a waterlogged pitch after a 0-0 A-League draw with Brisbane Roar in Redcliffe.

Wellington Phoenix coach Ufuk Talay has slammed the state of a waterlogged pitch after his team played out a soggy A-League stalemate against Brisbane Roar on Saturday.

Inundated by a deluge that swept across Redcliffe earlier in the day, both teams struggled to get to grips with the Moreton Daily Stadium pitch as a crucial match in the chase for the top six ended 0-0.

While Talay praised his team for finishing strongly as they searched for a late winner, the Phoenix boss was clearly rankled at playing such a vital game on a compromised surface.

"I think the pitch was terrible, to be honest," Talay said.

"It levelled the playing field for Brisbane ... it suited them probably more than it suited us because we're a footballing team, we want to play a certain brand of football and I think the pitch levelled the game for them."

The result doesn't really benefit either team as they try to break into the competition's top six with seventh-placed Brisbane remaining a point behind Western United.

The Phoenix, who have played three games more than the Roar, are a further point back in eighth.

Brisbane, coming in after their 4-0 win over Central Coast on Wednesday, had the lion's share of chances in the opening half with Joey Champness looking most dangerous for the hosts.

The introduction of Jaushua Sotirio at halftime swung the momentum in the visitors' favour however, with Ulises Davila and another substitute Reno Piscopo both testing Roar goalkeeper Jamie Young from distance as the Phoenix pushed for a late winner.

Roar coach Warren Moon was more philosophical about the state of the pitch.

"It had an impact on the game because that's the conditions we played in," Moon said.

"Football is played all over the world, in all different conditions ... tonight was wet and you just have to adapt to the conditions.

"We can talk about it but at the end of the day it's not the first time a game has been played in conditions like that."

Talay's frustration was compounded by yellow cards to Cameron Devlin and Louis Fenton which mean both players will be suspended for Friday's trip to Adelaide.

Fenton was booked for simulation after going down near Roar defender Macaulay Gillesphey, only for referee Tim Danaskos to show him a card for diving.

"Bit disappointed with Louis because I know Louis quite well and he's an honest player," Talay said.

"I can't see Louis going down unless there's contact.

"I haven't seen it on replay. I saw it live and it was from a distance. Louis is not one to simulate or dive."

The Roar face Western on Wednesday at Moreton Daily Stadium in a huge clash for the finals picture with Moon hopeful Englishman Gillesphey will be fit to play despite coming off late with a tight quad. 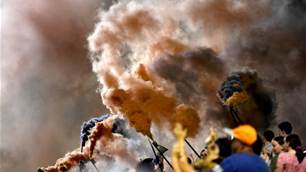