Brisbane Roar have consolidated fourth spot on the A-League ladder with a 2-1 win over Melbourne Victory in Sydney.

A vintage effort from veteran striker Scott McDonald has helped Brisbane consolidate a top-four A-League spot, with a 2-1 win over Melbourne Victory in Sydney on Wednesday.

The win shored up fourth spot for the Roar, who still have two games left and move within two points of the second and third-placed sides, who have each played one less game.

Victory looked the better side for most of the first half but failed to convert any opportunities and were made to pay after the break.

They slumped to a club record-equalling fourth straight loss.

McDonald's 56th-minute header from a fine cross by Bradden Inman took a slight deflection and Victory goalkeeper Matt Acton was unable to keep it out.

A mid-season signing from Western United, Socceroo McDonald, who turns 37 next month, notched his fifth goal in his last five games.

"He's had a great career but he's not done yet, we're going to try and extract every ounce of talent out of him,"' Roar coach Warren Moon said.

"He was excellent tonight and we're really happy with his performance,"' added Moon, after his first win as Brisbane coach.

Recent signing and substitute Matt Ridenton doubled the lead with a 78th-minute header from a Corey Brown cross, who was making his 100th appearance for the Roar.

Victory got a late lifeline and caused Roar some anxiety when the lively Andrew Nabbout scored from the penalty spot in the 86th minute after he was fouled by Roar captain and defender Tom Aldred.

Aldred partially atoned by getting in the way of a close-range Nabbout header a couple of minutes later.

In between those incidents, Brisbane had a penalty shout rejected after Jack Hingert was challenged by substitute So Nishikawa.

In stoppage time, Nabbout was foiled by Roar goalkeeper Jamie Young, though he did appear to handle the ball before shooting.

"I was happy with the way we addressed the problems at halftime and fixed them in the second half,' Moon said

"We kept the ball better and pressed them better and got our rewards."

Each goalkeeper made a terrific save in the first half.

At the other end, Young tipped a Storm Roux shot onto the crossbar.

"I felt we were in the game all night but we conceded two goals which we'll analyse and know we can do better," Victory coach Grant Brebner said.

"Our final pass at times was disappointing.""

Brebner felt his midfielders were braver and more creative than in their last game and was pleased with the progress of his young players. 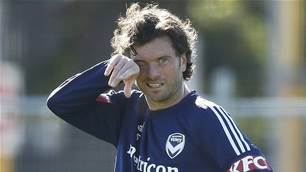 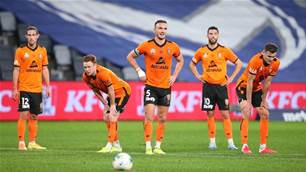 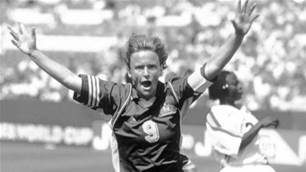