Newcastle Jets have re-signed and heaped the praise on Bernie Ibini after the ex-Socceroos attacker joined the club with immediate impact.

Ibini's storied career had him playing under Robinson once before at MLS club Vancouver Whitecaps and now the boisterous winger is firing for the Jets.

Newcastle have repaid the faith, locking Ibini down on another year long deal.

“Bernie is someone I’ve worked with before at Vancouver, he’s a good character to have in the locker room and he’s a great player,” Robinson told the club website.

“He’s a very versatile player and he can play in multiple positions, which allows us more flexibility.

“We’re happy to have him locked in for next season and I’m excited for what he’ll continue to bring to the team.”

While Newcastle's late season surge couldn't result in finals, the club's incredible run of victories to end the season puts them in prime position for a finals tilt next campaign.

“Scoring my first goal for Newcastle on Thursday night was a great feeling and getting the chance to spend another season here is, too,” Ibini said.

“I’m enjoying working under Carl again, and I’m confident he can continue to bring out the best in me.

“I’ve really felt the love from the fans since I joined the Jets and I’m looking forward to repaying it next season.” 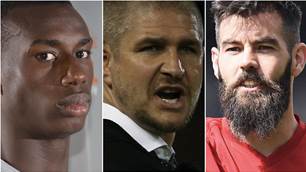 Carl's an Avid fan of his new signings