Rukavystya and his Maccabi Haifa teammates were dumped out of the Europa League on Thursday night after going down 7-2 to Tottenham Hostpur in a remarkable game in North London.

The Socceroo striker did, however, manage to find the net for the seventh game running in all competitions, whilst also setting up his side’s other goal.

Rukavystya’s fortunes were in stark contrast to those of two other Australian’s roughly 24 hours earlier, though.

On Wednesday, Awer Mabil played a big part in FC Midtjylland’s dramatic 4-1 win over Slavia Prague as the Danish side sealed qualification to the UEFA Champions League group stage for the first time ever.

And there was also history made in Asia, where goalkeeper Brad Jones kept another clean sheet as Al Nassr eased into the AFC Champions League semifinals in another club first.

Awer Mabil completed a remarkable journey to European football’s elite this week after dragging his team back from the brink of elimination in the Champions League qualification play-offs.

After growing up in a Kenyan refugee camp, he moved to Australia at 11 years old before a 2015 transfer from Adelaide United to FC Midtjylland in Denmark. And on Wednesday evening, he wrote a new chapter in both his and his club's history as the Danes progressed to the UEFA Champions League group stage for the first time ever.

Midtjylland had gone a goal down after just three minutes, but a bright display from Mabil led to him crossing for Sory Kaba to equalise just before the hour mark.

A controversial penalty was then scored at the second time of asking on 84 minutes before Frank Onyeka put the game to bed just a few moments later.

And Mabil again was involved in setting up the goal to put the icing on the cake, as substitute Andres Dreyer completed the rout in stoppage time.

Midtjylland will now face Jurgen Klopp’s Liverpool side in the group stage, after being drawn in Group D along with Ajax and Atalanta.

The former Liverpool goalkeeper was unbeaten between the sticks in a 2-0 win in Doha on Wednesday, helping his club progress further in the tournament than they ever had before.

Goals in either half from Gonzalo Martinez and Abdulfattah Asiri sealed the win in a confident performance from the team that finished second in Saudi Arabia’s top flight last season – ahead of Al-Ahli in third. The clean sheet is Jones’ second in a row, after foiling compatriot Mitchell Duke and his Al Taawoun teammates in the previous round, and means he has now conceded just once in five games in the 2020 competition.

Al Nassr will now face off with Persepolis FC from Iran in the semi-final on Saturday, the winners of which will face the winning semifinalist from the eastern block of the tournament, to be determined in December.

Not without a fight

There was no such success for Nikita Rukaytsya after Maccabi Haifa went crashing out of the Europa League in emphatic fashion on Thursday evening.

But the Ukrainian-born Socceroo did at least go down swinging by extending his exemplary record in front of goal this season.

After Harry Kane put Jose Mourinho's Spurs ahead just two minutes in, Rukaytsya was involved in the build-up as Tjaronn Chery laced in a superb equaliser from long range.

Tottenham hit back right away and was soon running rampant, heading into half-time with a 4-1 lead. But Rukaytsya reduced the arrears on 52 minutes, sending ex-England stopper Joe Hart the wrong to convert from the penalty spot. 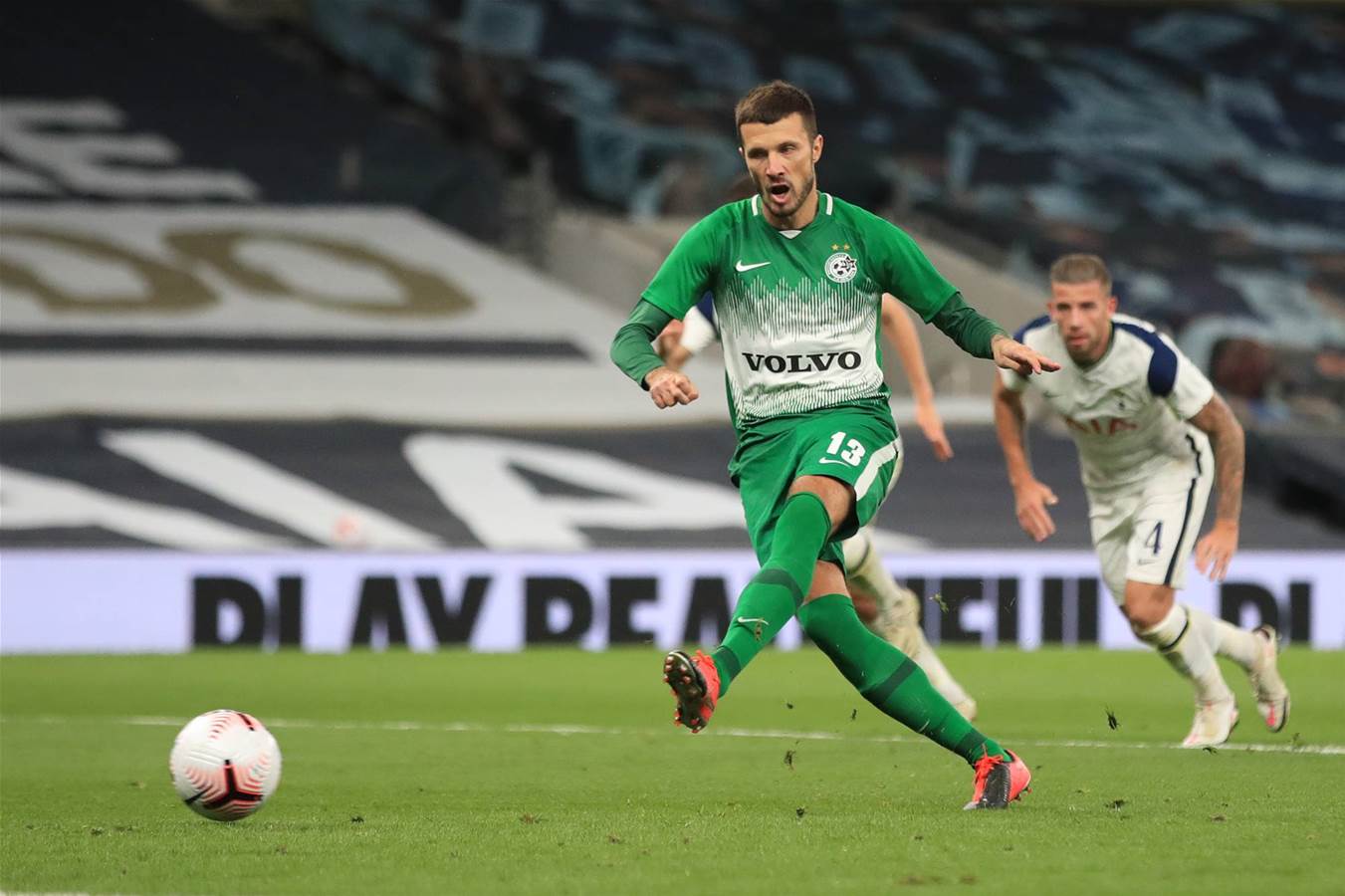 Again, though, Tottenham hit straight back almost immediately before Kane completed his hat-trick and Dele Alli struck a seventh in stoppage time to complete the drubbing.

Ruksytsya ends the Europa League campaign with a remarkable four goals and four assists from four games, while he moves onto nine goals in seven games in all competitions this term.

- Aaron Mooy came on for the last half an hour of Shanghai SIPG’s 1-0 loss at Chongqing Dangdai Lifan on Monday. Table-toppers Shanghai rested its overseas stars having already progressed to the championship stage of this season’s Chinese Super League as Group A winners.

- Harry Souttar made it four clean sheets from his four games at the heart of Stoke City’s defence this season, as the Potters defeated Premier League Aston Villa 1-0 in the Carabao Cup on Thursday.

- Youngster Tyrese Francois was an unused substitute in Fulham’s 3-0 loss at Brentford in the same competition.

- Milos Degenek played what may be his final game for Red Star Belgrade, the club he’s supported since childhood. The Serbians won 2-1 against Ararat-Armenia to progress to the Europa League group stage – it has been reported that Degenek is set to be sold to Belgian club Gent, with Red Star in need of cash after failing to qualify for the Champions League.

- LASK went marching on into the Europa League group stage with a 4-1 win at Sporting Lisbon, in which James Holland played the full 90 minutes.

- Tomi Juric also saw his CSKA Sofia side progress in the competition after a late turnaround in a 3-1 win at FC Basel. Juric was an unused substitute.

- Mitchell Langerak was beaten by Spain icon Andres Iniesta as J-League side Nagoya Grampus lost to Vissel Kobe on Wednesday. The Aussie stopper made a couple of good saves after going behind to limit the score to 1-0.

- Elsewhere in Japan, Thomas Deng was also on the losing end by a narrow, one-goal margin. The defender came across to snuff out a cross from the right, but his slack clearance allowed Leandro to find Kensuke Nagai to bury the winner.

- And Jason Geria was an unused substitute as JEF United drew 0-0 with Kyoto Sanga in the Japanese second tier.

- The Lambert twins were both in the squad for Den Bosch’s 6-1 drubbing against Telstar in the Dutch Eredivisie. Declan started the game in defence but was subbed off with the score at 2-0, while Ryan remained an unused substitute.

- Gabriel Cleur played the full game as Virtus Entella won 1-0 against Albionleffe to progress in the Coppa Italia. He was booked just after the hour mark.

- Andy Rose started his seventh MLS game of the season for Vancouver Whitecaps on Tuesday, but couldn’t prevent his team from losing 1-0 to Portland Timbers.

- Meanwhile, full-back Brad Smith, who recently turned his loan spell at Seattle Sounders into a permanent transfer, came on for the last 20 minutes of a 3-1 win at LA Galaxy on Tuesday.

- Antonee Gilroy played 90 minutes at the back for Tacoma Defiance in their 1-0 USL Championship win over Sacramento Republic.

- Daniel Wong remained on the bench as Beijing Renhe ended Chengdu Better City’s 100 per cent record, winning 3-2 to move up to third in China’s League One.

Perth Glory fan-favourite and 30-cap Ireland international striker Andy Keogh is set to rejoin the WA club for his third spell in the wake of the COVID pandemic.

Melbourne Victory have completed the signing of Brisbane Roar goalkeeper Max Crocombe on a one-year deal.