The Mariners have one of the youngest squads in the competition and Rowles has been a shining light for the club.

The 21-year-old, who has represented Australia at both Under-17 and Under-23 level, has missed just one league game this campaign.

Rowles is enjoying his football and is excited about the improvement ahead for the likes of 19-year-old Samuel Silvera, 20-year-old Gianni Stensness and 20-year-old Josh Nisbet.

"I’m feeling good," he said. "I’m just trying to do the best I can for the team and help the team as much as possible. That’s pretty much what I focus on.

"It’s great the young boys getting a chance and taking it with both hands. We’ve got a few more than other clubs that are getting a good crack and it’s good to see them getting better week-in-week-out."

Rowles has been a regular in central defence and says communication is vital.

"Just the key thing is communication week-in-week-out, just trying to help everyone in the backline as much as you can," he said.

"They do the same for you, so you just have to help everyone out pretty much."

Central Coast were beaten 2-0 by Brisbane Roar in their last match and Rowles admits the defeat was tough to take.

"It’s a disappointing result but we can still take positives from how we played," he said.

"We’re still creating chances and a couple of lapses in defence hurt us. The heat played a bit of a factor. We were a bit more used to it in the second half, we came out of our shell a little bit more but definitely had a slow start.

"It's never nice [to concede goals], especially when you focus on set-pieces. To concede one is a bit disappointing, but that’s football." 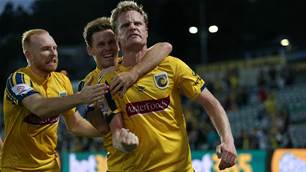