How did Europe ever think it would get its finances right when European soccer couldn’t get its act together? 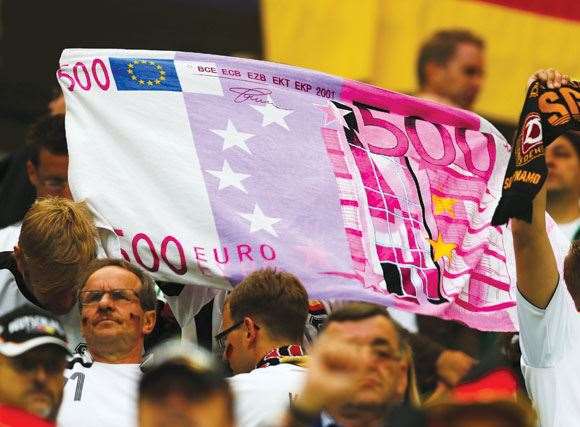 How did Europe ever think it would get its finances right when European soccer couldn’t get its act together?

A thought drifted in while watching Germany play Greece in the quarters of Euro 2012, just the latest in the long string of soccer games as overwrought political metaphor. As the two main antagonists of the Euro drama (the currency, not the competition) met, the convergence of the fiscal and the soccer led to one inescapable question: how did Europe ever think it would get its finances right when European soccer couldn’t get its act together?

Just as austerity became the word in government, European soccer came up with its own gesture towards cutting back ‒ UEFA’s Financial Fair Play, or FFP. The idea was to rein in the clubs’ out-of-control spending, with each required to balance its books in an initial three-year window beginning this past season. The regulations require that club revenues cover player wages and transfers (other costs, such as facilities, were left out), and failure to meet the target budget (a maximum $56 million loss initially, then lowered to $37 million) would result in clubs being ruled out of UEFA’s competitions, the Champions and Europa Leagues.

If it wasn’t exactly a salary cap system of the likes we’re familiar with here or in the United States, it was an attempt by European soccer to create some kind of equalising flow-on effect from the balance sheet to the pitch. The familiar aristocracies atop the league table in each country could sense the immediate challenge; the nouveau riche clubs even more so. Manchester City is the poster child for the coming FFP crunch, having posted a loss in 2010-11 of $303 million, a record for an English club, with a wage bill of $270 million and revenues of $233 million, according to Deloitte’s most recent report on the world’s richest clubs, the numbers made to work only by the grace of City’s benefactor, Sheikh Mansour.

City embarks this month on the defence of its Premier League title, won in such exciting fashion last year, but how it does off the field will be as closely observed as the results on it. Deloitte had City at 12th in its Football Money League standings, but noted that the club was a certainty to move into the top ten by the time of its next report, thanks to its presence in the Champions League and its massive stadium sponsorship and development deal with Etihad.

The arrangement with the Abu Dhabi airline highlighted a potential flaw in FFP – while costs were only soccer-related, revenue could come from a wide variety of sources. Financial Fair Play was at risk of producing some exquisite unintended consequences. Rather than rewarding the Arsenals and Tottenhams of the world, or even levelling the field for the Aston Villas and Newcastles, it would tip the balance to those clubs that could gross more, in ever more creative ways. Real Madrid, Money League No.1 and always ahead of the curve in profiteering (a club official once described its Galacticos policy, without a hint of irony, as a soccer team running its business the way a movie studio would), went for the logical extreme when it proposed building a Real theme park on an island in the United Arab Emirates, a la Ferrari World.

Such a move would seem to be a nice safeguard against FFP, but then Real already posted revenues of almost $600 million in 2010-11, with a payroll of less than half that figure. Nevertheless, the fight is on about what UEFA deems “relevant income”, with clubs sure to pull off all sorts of creative accounting to meet obligations, or even a legal challenge under the EU’s competition laws.

There’s a major difference between Europe’s new soccer austerity as opposed to the wider one – FFP will happen against what is still a backdrop of economy-defying growth in soccer. It’s an uneven one – the top 20 clubs account for a quarter of the $21 billion market, and wages really are out of control, in the case of England exceeding 70 percent of revenue. Even as the Premier League signed another huge TV deal two months ago, an increase of $1.5 billion on the previous deal, Deloitte noted that previous TV rights money had been soaked up by player costs.

Economists are always at pains to say that money can’t buy a team success, but it’s a hard sell in a time when Man City is the champion of England, and its forerunner, Chelsea, is the champion of Europe. Soccernomics’ Stefan Szymanski noted the predictive power of the total value of player contracts for each of the countries at Euro 2012, with  the better-paid nations outperforming the lesser-paid ones – it even picked up on the early exit of the disappointing Dutch. The Germans, alas, ended up thumping the Greeks in their quarter-final. Euros (the currency) plainly tell at the Euros (the soccer).