Maty Ryan's Brighton & Hove Albion have eased some relegation fears somewhat after picking up a vital point in a 0-0 draw with Wolverhampton.

Brighton and Wolves played out a goalless draw at Molineux.

The point sees the Seagulls in 17th spot, just above the relegation zone and three points above Cardiff City in 18th.

Brighton headed into the match after five defeats in a row but Ryan was the hero as they ended that poor run.

The Australian made a crucial save on Leander Dendoncker midway through the second-half.

Three minutes from full-time the goalkeeper was then on hand to stop the Belgian's header and ensure a cleansheet.

"We asked the players for a response," Brighton boss Chris Hughton said.

"It’s very hard to come here – if you open up too much they can hurt you. The feeling in the changing room has been good. You don’t become a bad team overnight. We have a great group of supporters who travel in their thousands every game.

"There’s probably a little bit of relief. I’m not sure many people would have backed us to get any type of result, but we have. We’ve conceded a lot of goals and a lot of corners. They’ve got some aggressive players, so we had to defend really well." 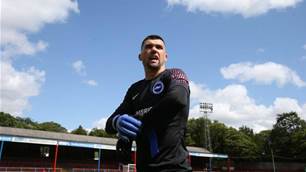