Adelaide United have won three in a row after beating Central Coast 3-1 on Saturday, and now head home for three straight games at Coopers Stadium.

Now United coach Gertjan Verbeek believes his team have the opportunity to establish themselves as an A-League title force over the next month.

Last night's result means Verbeek's side can finish as high as fourth by the end of the round, setting up what could be a pivotal month ahead.

But the first-year coach conceded the uneven amount of the teams in the league meant it was difficult to fully assess his squad's start to the season.

"We had Sydney in the first game at home and then the second game was Melbourne City. So it was a difficult start," Verbeek said.

One thing he does know, however, is that United have the "strange" advantage of playing their next three matches at Coopers Stadium.

They don't leave home until a rematch with the Mariners on December 22.

"It's a little strange situation that you have three games in a row at home because that's an advantage," Verbeek said.

"So we hope we can use that advantage and we get some more points."

Verbeek was satisfied with his team's comprehensive win against Central Coast, but questioned their ruthlessness in the second half.

Striker Kristian Opseth missed a penalty in the 58th minute.

"The break point was the penalty we missed. It motivated the opponent. A few players who don't run forward so much more and forgot to defend," Verbeek said.

"At the end I wasn't afraid we could lose the game, but it's a pity we didn't get the form back from the first half."

Captain Michael Jakobsen failed to finish the match after aggravating a back issue that could rub him out of next week's match against Melbourne Victory.

"He already had it for two years back when he was playing for Melbourne City. He got some injections and later it was better, but it's coming back," Verbeek said.

"So I hope it's only this week. But the travelling and the training, maybe next week with a little bit more rest, he will be back again." 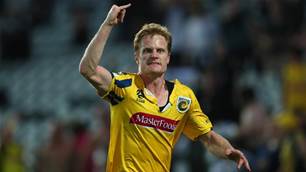