Bobby Burns has revealed how Newcastle's Scottish connection, and a few former A-League players, helped seal his loan move to the Jets.

Burns has joined Newcastle on a season-long loan from Scottish club Hearts.

With Jets coach Ernie Merrick and CEO Lawrie McKinna both Scots, the pair had been keeping an eye on the 20-year-old fullback who was looking for regular senior football.

"I had offers in England and Scotland, but it probably would have been a step back," Burns told FTBL.

"I was looking at options abroad and people from Australia contacted Hearts. Obviously the Jets have a Scottish CEO and manager, so I don’t know if it was through their Scottish links, I’m not sure.

"But soon after I got a couple of offers from abroad, in Europe as well, and then the offer from Australia came. And I spoken to the Jets and they were really keen to have me.

"I spoke to a couple of people I know, the likes of Aaron Hughes who was Melboune City, he spoke quite highly of the A-League. I just thought it was a great challenge, both for the football and on a personal level, I thought it would be a great opportunity.

"Australia is a country I’ve always admired from afar, I know quite a few people travelling here. Things just clicked into place at the right time."

The trio helped convince him of the merits of a stint in the A-League.

"They helped me quite a lot. Lawrie actually rang Oli Bozanic to get a report on me. He must have said all the good things and left out all the bad, haha. The next thing I knew there was an offer. All three of them spoke very highly of the league.

"It’s a good league. I think it’s a level where if I do really well this season, come back to Hearts and I will be in a good position to fight for my place. It’s a good opportunity to prove myself at this level." 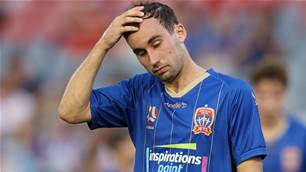