Double title-winning captain Alex Wilkinson will return to Sydney FC for another year after signing a new contract which will take him through to the end of the A-League 2021/22 season.

It will be Wilkinson's sixth season with the club as he goes looking for a fourth A-League crown, with the 36-year-old saying he's still hungry for more silverware.

"I'm feeling good and I'm extremely pleased to be captaining this fantastic group of players once more," Wilkinson said in a statement.

"With the FFA Cup returning and another AFC Champions League campaign to contend with, plus our challenge for more premiership and championship titles, it's going to be a tough and very exciting season."

The defender has missed only three A-League games in five seasons, two of which was when the coach decided to rest him, and he was the club's only player to play every second of last season.

Wilkinson has already won more premierships (five) than any player in Australian National League history (since 1977) and also holds the A-League record for most finals appearances (27) and grand final (7) appearances.

He is also one of only five players to make 300 appearances in the A-League, despite having missed three seasons playing in Korea.

Sydney FC coach Steve Corica praised Wilkinson's ability and desire to win, describing him as one of the best players Australia has produced.

"We are very fortunate to have Wilko and our success in recent times has been in no small part down to him," Corica said.

"He is showing no sign of slowing down and his performances will be key in leading our club to more success next season and I'm delighted he is returning." 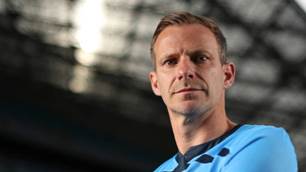 A-League hub may be necessary: Corica