After one of the worst A-League seasons in their history, Melbourne Victory are determined to nail their rebuild - starting with appointing their next coach.

Melbourne Victory will enter the upcoming A-League off-season well aware it shapes as a defining point in the club's history.

"Is it going to be the biggest rebuild that we've had? Arguably yes," interim coach Grant Brebner said after Wednesday's loss to Western Sydney.

"Because ... league position-wise, it's not the best position we've ever been in.

"So yes, we need to get some good signings and we need to get the club to where it needs to be - which is at the top end of the league and winning premierships and championships."

That will start at the top, with the appointment of Victory's next head coach.

Victory chairman Anthony Di Pietro stressed on Wednesday night the club "have got to get (the appointment) right."

Ange Postecoglou's Yokohama F.Marinos assistant Arthur Papas and former Brisbane and Melbourne Heart coach John Aloisi have been linked to the job, while Brebner is also in the mix.

"I have no idea what the club's planning to do," Brebner said.

Victory won just one of five games under Brebner, who took the reins ahead of the season restart, but scored nine goals and showed potential.

Brebner said his tenure had focused on bringing back "non-negotiable" traits like workrate and enthusiasm, while he praised the young players - like Birkan Kirdar and Aaron Anderson - who had stepped up.

With Ola Toivonen and Andrew Nabbout among the prolific departures, a squad upheaval appears certain.

"We need to assess what we need, we need to complement that with not just ability but ... getting some real men in the team, some leadership on the pitch," Brebner said.

"And we've seen that we've got talent.

"So like every team, we'll evaluate the roster and we will bring in the players we need to get stronger and better."

Victory are scheduled to continue their postponed Asian Champions League campaign in a hub in Malaysia in October.

Despite lingering uncertainty, Brebner said the club would prepare as if that tournament was going ahead. 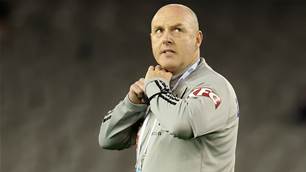