Bailey Wright is confident Sunderland will bounce back after suffering their first defeat of the season.

The English League One side, which is aiming for promotion, went down 3-1 to Portsmouth.

The Black Cats had been unbeaten before this result, with four wins and two draws from their first six matches.

"We take a lot of pride in being solid defensively and not conceding, as the five clean sheets we have kept have shown," Socceroo defender Wright told Chronicle Live.

"Although saying that, we know there's going to be games where we concede and we lose and unfortunately Saturday was one of them. Credit to Portsmouth, they came here with a plan and executed it well.

"There were fine margins in the game and fine points in which the game changes. We're not going to get too disappointed about it. This is football, we've had a good start and we just continue to keep doing all the things we're doing that have given us success so far.

"Two points per game, is a good average but this is a tough old league. We have a good togetherness on and off the pitch and we have a lot of things that are ticking boxes.

On Saturday, there were a lot of positives to take and to build on and a lot of criticisms that we need to take on board. With every game comes an opportunity to get stronger and that's how we look at it." 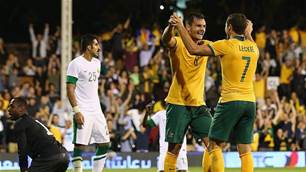