Mitchell Duke says he is proud of the efforts of his Al Taawoun teammates despite being dumped out of the AFC Champions League by Al Nassr on Sunday.

The battle between the two Saudi Arabian sides was also a showdown between two Socceroos, with Duke coming up against Brad Jones between the opposition goalposts.

Jones kept a clean sheet for a dominant Al Nassr outfit, which eventually made the breakthrough after 75 minutes when Abderrazak Hamdallah blasted home through the legs of goalkeeper Cassio.

The defeat comes just three days after Aussie forward Duke headed Al Taawoun into the knockout stages of the competition for the first time in the club’s history.

Last week’s matchwinner took to social media to reflect on Sunday’s result in the aftermath of the defeat.

“Unfortunately we have been knocked out of AFC Champions League round of 16 but I am proud of the boys and everyone at the club for making history going this far!” he wrote.

“Hopefully in the future we go another step further. [I’ve] enjoyed playing my first tournament with my new club. Now time to recover.

“Looking forward to the season starting in October.”

HIGHLIGHTS | All eyes are on Abderazak Hamdallah as his goal earn Al Nassr a place in the Knockout Stage!

Sunday’s game was one of few clearcut chances, with neither side registering a shot on target in the opening 45, despite Al Nassr’s dominance in possession.

Duke was later involved in what was arguably his side’s best chance of the game, crossing from the right to set up Hassan Kadesh, but the Saudi forward was unable to convert.

Al Nassr then made the all-important breakthrough before Duke was substituted seven minutes from time.

He and his teammates will now look ahead to the new domestic season, due to begin on October 16 – two months later than usual due to the coronavirus pandemic.

Jones, meanwhile, will be in action much sooner, with Al Nassr facing another Saudi derby against compatriots Al Ahli in one of the West Zone quarterfinals on Wednesday night.

Uzbekistan’s Pakhtakor FC and Iran’s Persepolis FC square off in the other tie, with the semi-final due to take place on October 3. 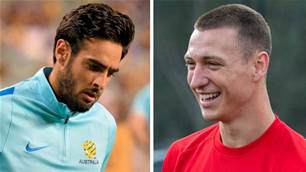