Brighton could be renamed the Socceroo Seagulls with Tom Rogic lined up for a possible swap to make a Celtic deal come true.

The Daily Record in Scotland claims Celtic have been eyeing up Brighton talent Shane Duffy – and could sacrifice a likely $7.5 million transfer that was set to send former Central Coast Mariner Rogic to Qatar.

Instead, Celtic are said to be considering offering Brighton a swap deal including Rogic for Duffy in a move that would see the out of favour forward teaming up with Socceroos Aaron Mooy and Mat Ryan.

Teenage Socceroo hopeful Cameron Peupion also joined the EPL club from Sydney FC this week to turn the South Coast side into an Aussie home from home.

Centre back Duffy is said to be a lifelong Celtic fan and has dropped out of first team contention with the Seagulls, making him keen for a move to Parkhead.

And Rogic (and Socceroos coach Graham Arnold) would almost certainly welcome the chance to play with Ryan and Mooy every week.

West Ham are also said to been keen on Duffy, but Celtic hope throwing in Rogic will sweeten the deal enough to get it over the line. 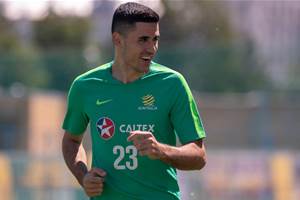 Socceroos star Tom Rogic is set for a move to the Middle East after falling out of favour at Celtic, according to reports in the UK.

However time may be against the Bhoys - the deal with the un-named Qatari club for Rogic was said to be concluded within 24 hours.

Brighton are also said to be keen to grab Rogic, according to the Record.