It appears Socceroo striker Robbie Kruse will move from his German club VfL Bochum in Bundesliga2 at the end of this season: but which option will suit him best?

According to reports, Kruse is set for a move at a crucial juncture in his career.

The question is: what does the 30-year-old want from the remaining few years of his career?

If Kruse still wants to play for the national team - and that’s a moot point given some disgraceful social media posts attacking him in recent years - then the forward must find a club that’s at a strong level and where he’ll play regularly.

Should the World Cup Socceroo simply want a pay packet he should be able to find that in Asia.

If he does move on from VfL Bochum in Bundesliga2, these are options we believe the 30-year-old former Roar and Victory forward might consider. 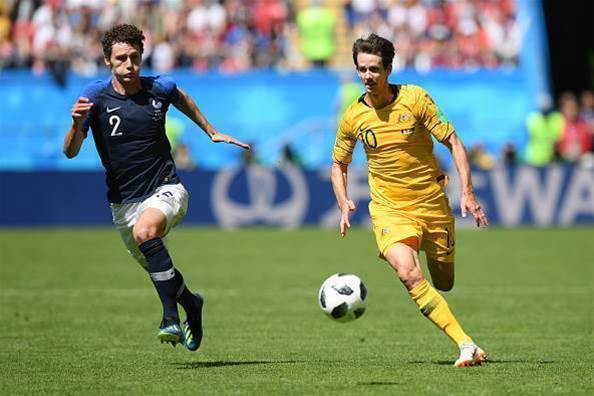 Kruse on the burst against eventual World Cup winners France

To stay in the national team you need to be playing regularly. That’s key in Arnie’s thinking. And at a level that puts you ahead of the other options.

1: Remain in Germany at a club that needs another striker to play regularly (over say 30 games a season). Kruse knows German club football and should slot in easily at most clubs.

2: Other European leagues such as Holland (perhaps in their second tier) or Switzerland are also options as long as he can find regular game time.

If Kruse feels his time in the national team is up, he may be looking to his future with a big payday somewhere in the world.

He may not qualify as a marquee in the A-League.

And China is no longer such an easy option for Australian players due to changes in AFC + 1 rules.

And new rules to curb extravagant spending in the Chinese Super League means only the biggest names can command huge salaries.

1: The South-East Asian leagues: such as Thai League (huge money is on offer with improving standards) Indonesia and Malaysia's Super League.

Playing from March to November puts Kruse in a better cycle for fitness around Socceroos World Cup qualifiers.

And with improving wages, he can earn a good salary.

And there's no doubt the standard is getting better each year in the booming US league.

Kruse might be a perfect fit for an MLS club looking for a wide striker. He'll be good enough to play regularly and make a decent wage.