It will be well received by Socceroos fans, who have been asking for more Australians to test themselves in Europe amid an exodus towards Asia this offseason.

In a frank interview with Optus, Taggart revealed that he realises the Socceroos need a consistent number nine and is still seriously ambitious to ensure he becomes that man.

“I agree, since those players (Viduka, Aloisi, Kewell, Cahill) have gone, the country has found it difficult to find a regular No. 9,” Taggart said.

“I believe that we have got a couple of different options, obviously Macca (Jamie Maclaren) and myself being different sorts of players as well.

"(They are) definitely shoes that I want to fill.

"Definitely the last year, becoming a more regular player in the national team, has reminded me of where I want to be and what I want to achieve.

“I’m 27 now, I still think I’ve got a lot more years ahead of me, so to be a regular in the national team as a No. 9 is definitely among my aspirations.

“Being back last year after having such a long time away, made it really special, but being only 27 still, I think there is a big opportunity and a lot of time to grow into that position because it was only last year that I was back involved.

"It is definitely a massive aspiration of mine.”

After winning the K-League golden boot last season with 18 goals, Suwon have struggled this season and currently languish near the bottom of the table.

They've dropped Taggart from the matchday squads recently, while club officials confirmed that they were attracted to offers from the Middle East.

For his part, Taggart affirmed that he's seeking to move forward in his career, wherever that may be.

“I think when I went to Brisbane that was the start of me trying to just see how far I could go in my career and, without sounding like an idiot, after ticking Korea off my bucket list sort of thing, that is actually the way I felt,” Taggart said.

“I came over here, I wanted to be able to win a Golden Boot or achieve something as a team, so I still want to take the next step in my career now.

“I think I’ve made that pretty obvious to everyone that as much as I’ve enjoyed my time here in Korea, there is definitely more that I want to achieve and I want to go to the next level wherever that is, it is yet to be seen.

“When that opportunity arises I’ll be ready to take on the next challenge and to just try and carry on that cycle for as long as I can because it was a great achievement last year but I still think there (are) tougher places to go, and more to achieve.

“The next journey after my time here at Suwon is definitely something (where) I’m looking to take another step up.” 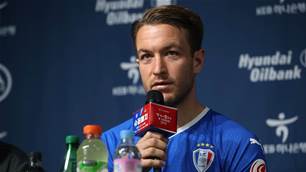