Adam Taggart is enjoying the golden period of his entire career, hitting his seventh goal in seven games overnight to rocket Suwon Bluewings into the top six.

Taggart has 11 goals in 18 matches for Suwon, who are now in the finals places – but without the Aussie dynamo, would likely be staring at relegation.

Taggart's phenomenal Korean form is a highpoint in the 26-year-old's career. Although he started for Australia in the 2014 World Cup, the powerful, mobile striker has failed to recreate his strong scoring form outside of the A-League.

Lean spells at Fulham and Dundee preceded another prolific A-League venture, where despite an injury-hit spell at Brisbane Roar, Taggart earned a move to the Korean club.

Now Taggart has finally hit his stride overseas, already earning rave reviews within the Korean media and propelling himself to the top of the K-League scoring charts.

The latest was an excellent poacher's effort, tucking away a rebound to double Suwon's lead in a 2-0 win against Sangju Sangmu.

Taggart's form puts him in prime position for the K-League All Star's match against Juventus, where he could go toe-to-toe against Cristiano Ronaldo.

While he's had to settle for a place on the bench for many of Suwon's matches despite his incredible scoring form, Taggart told The World Game that it's these sort of opportunities and challenges that the A-league simply cannot replicate.

“In the A-League, most teams have a starting XI and that’s about it,” he said.

“We have a big squad here and it’s important to rotate to make sure everybody is fresh and motivated.

“All the young boys here are top-quality as well and there’s huge competition for places. That’s what you want really and it’s what makes you a real player."

Graham Arnold, who selected Taggart to start in the Socceroos' last match, a 1-0 loss to South Korea in Seoul, will be hoping that the striker's current hot-streak can translate to national team level.

While Taggart's facing stiff competition at club level, striking options are few and far between for the national team, leaving Taggart a sole, if very promising, hope for upcoming World Cup qualifiers.

“If you go through your whole career with your place in the line-up unchallenged then, in my opinion, it’s not exactly pushing you to become the best player," Taggart added.

“Footballers thrive on competition and I plan to keep pushing those boundaries until I can’t push them anymore.

“I love it here and hope it’s just the beginning. I think there’s a lot more to come in all aspects.” 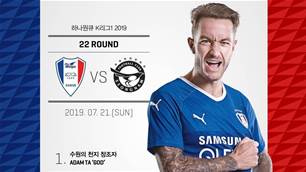