Striker Adam Taggart was expecting Jordan goalkeeper Amer Shefi to go to ground when he scored the winner in Australia's 2022 World Cup qualifier in Amman.

Taggart's goal lifted the Socceroos to a 1-0 victory in Jordan on Thursday night, their first away win over the hosts.

He now has three goals in two appearances and sits with defender Harry Souttar (3) and striker Jamie Maclaren (4) among the team's top goalscorers.

The Suwon Bluewings striker says it was like history repeating as he had been practising that same finish in training.

"It was a good team goal, exactly what we worked on the training ground to be honest, so it was nice get that opportunity," the 26-year-old said.

"Once I'd gone through I knew exactly what to do from the information we all had from the coaching staff. So it was a nice team goal."

Manager Graham Arnold says the Socceroos coaching staff had worked with Taggart on the scenario after noticing Jordanian defensive habits in their analysis.

The mentor said that the hosts' centre backs usually charged out if other players managed to get between the lines, which is what Irvine did in the lead-up to the goal.

"When he starts going into Jackson (you) make a run in the space behind where the centre back comes out from and it worked great," Arnold said.

He said the next step was analysing the reactions of the goalkeeper Shefi, who the manager said had a habit of falling to the ground in one-on-one situations.

"It was just a matter of lifting the ball and execution was great," Arnold said.

Taggart said it was an example of the great team goal, given the involvement of both Irvine and the coaching staff.

"Literally that exact scenario is what we'd worked on, we knew we would have that situation coming into the game," he said.

"So I was ready and I didn't need to much time to think about, I knew exactly what do." 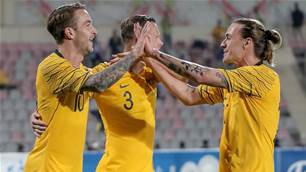 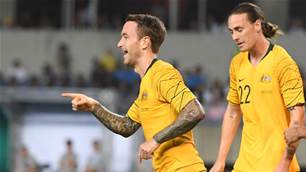