The Socceroos have thumped Taiwan 5-1, extending their winning streak to six matches, to all but seal a spot in the third round of World Cup qualifying.

After effectively sealing a spot in the third round of World Cup qualifying with a 5-1 thumping of Taiwan, the Socceroos will turn their focus toward topping their group and taking momentum into the next stage.

Mitch Duke's brace helped the Socceroos win their sixth game in a row which consolidated first place in Group B - and guaranteed a top-two finish - before games against Nepal and Jordan.

Australia now have a maximum 18 points from six games and a goal difference of +22 - even if they let top spot slip they would be one of the four-best runners-up advancing to the 16-team next phase.

"Job done and two more games to go in this group," player of the match Duke said.

"So we want to get maximum points and that's the main target for us."

As flagged, Graham Arnold rotated his entire starting XI from the team that beat Kuwait 3-0.

Macarthur FC midfielder Denis Genreau started on debut with Arnold introducing Connor Metcalfe in the 64th minute and Ruon Tongyik in the 86th for their maiden caps.

Kenny Dougall and Riley McGree made their first starts in the green and gold while in a feel-good story, defender Curtis Good started at left-back for his first cap since his 2014 debut - with his international career previously derailed by hip flexor injuries.

"We had a very inexperienced team that was given an opportunity - only a couple of senior players around them.

"They handled everything really, really well."

The Socceroos took the lead at Jaber Al-Ahmad International Stadium when McGree picked out Harry Souttar from a corner and the Stoke City defender powered home a back-post header.

Jamie Maclaren doubled Australia's lead from the penalty spot in the 27th minute after he was hacked down in the box.

In the 41st minute, McGree floated in a corner to the far post where skipper Trent Sainsbury comfortably headed home.

Less than a minute into the second half, Genreau burst forward and found Brandon Borrello, whose clever cross was well met by Duke at the near post - for his first Socceroos goal since 2013.

The Aussies conceded off the back of sloppy defending in the 62nd minute.

Tu Shao-chieh burst forward and cut the ball back for the inexplicably unmarked Wei-Jie Gao, who smacked a first-time shot past Danny Vukovic.

Striker Nikita Rukavytsya made his first appearance since November 2017 in the 74th minute.

Ten minutes later, substitute Ajdin Hrustic dropped a clever ball to Rukavytsya who held his ground and cut the ball back for Duke to bury his second and round out the result. 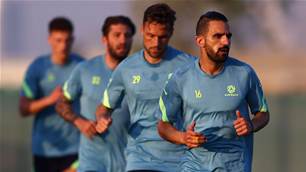