Since the Socceroos have arrived in Tokyo after their Oman game, the focus has primarily been on recovery and adjusting to the time zone difference.  Their next match will probably be their most difficult so far in this Group B qualification round.

In matchday 4 of the third round of AFC 2022 World Cup qualification the Australians will be taken on Japan.  Heading into the game, they are on a historic 11 game winning streak.   To make it to 12 they must beat the Japanese, no easy feat considering the current pressure on the hosts.

Japan have had a terrible start to their World Cup qualifying, losing to both Oman and Saudi Arabia.  The hosts only have found the back of net only once this round in their single win against China.

Many have described this match as a must win for the Japanese in order to keep their hopes realistically alive for automatic World Cup qualification.  The challenge that this pressure may have on the hosts does not seem to phase the Socceroos.

"The focus is on ourselves.  We know what we can do and we know what we have done over this campaign. It will just be the same messages to all the boys.  It is a big game but we are just concentrating on ourselves." said Socceroos defender Harry Souttar about the upcoming match.

"Their form has not been discussed by anyone.  Like I touched on before it is all about ourselves and the style that we have got.

"Three wins out of three, nine points.  We are hoping to make that twelve come Tuesday."

Souttar's focus on his current team, their next game and their current form extends past the Socceroos to his current club, Stoke City.  The young defender has not let rumours about possible links to Premier League clubs distract him.

"I think it is just all paper talk to be honest with you," he told the West Australian. "There has been a lot of things said.

"I tend not to read them or try to get involved with them at all.

"We just started October.  The transfer market has been and gone.

"My focus at the moment is on the Socceroos and as soon as I get back to club football it is purely on Stoke City and trying to get the club promoted by to the Premier League."

Should the Socceroos accomplish Souttar's prediction and come away with the three extra points tonight, it will be the Australian's first win against Japan since July 2009.  This would extend their incredible World Cup qualification winning streak, a historic one in world football.

For now the team is only focusing on the task at hand.  They kick off against Japan at 9:14PM AEDT. 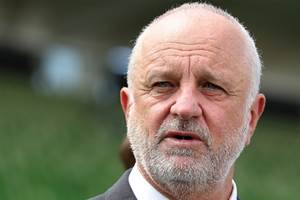 The Socceroos match against Japan can be viewed on 10 Bold and 10 Play on demand.