Socceroos striker Martin Boyle has been linked with a dramatic move from Hibernian to English championship side Stoke City.

Despite being arguably Hibs' most important player, Boyle's move has reportedly been in the pipeline for some time.

The Edinburgh Reporter is claiming that Hibs are close to signing Dunfermline striker Kevin Nisbet, who scored 23 SPL goals last season, on a six-figure deal.

The rumours are also given credence by the fact former St Johnstone winger Drey Wright has been training with the club for the last two weeks.

Interest in Boyle has been reported by Stoke City's coach Michael O'Neill, with Stoke also reportedly interested in Aussie Livingston striker Lyndon Dykes, before Rangers and Celtic took over reports. 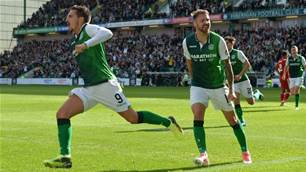 Socceroos striker's ferocious loyalty to club that saved his career