For the second time this year the Australian men's team may play a "home" World Cup qualifier abroad.  Football Australia had hoped that the upcoming qualifier versus Oman could occur at Bankwest Stadium in Sydney.

An attempt to create a travel bubble, in which both teams could have been contained and in turn avoided the current two weeks of hotel quarantine required for all new arrivals to Australia, was not approved in time for the match reports the Herald Sun.

The match is therefore expected to be played in Doha, Qatar's capital city.  The Socceroos are familiar with the city having played their "home" qualifier against China there in early September.

At present the game remains scheduled for October 7th of this year.  Following the Oman game the Australians will then travel to Japan for their fourth Third Round qualifier on October 12, taking place in Saitama.

Being that the previous Doha based "home" qualifier resulted in a 3-0 win for the Socceroos, one could expect the change to not adversely affect Graham Arnold's squad.

The change may even be to the team's short term benefit as a significant part of Arnold's squad is based in Europe and this should reduce their travel on an otherwise already travel intensive upcoming international window.

Should the Australians win their upcoming Oman match, they will extend their current record-breaking winning-streak.  The Socceroos have won the previous ten matches they contested including the first two in the Third Round of World Cup qualifying.

It could also help the team remain top of the Third Round Group B table ahead of their match against Japan, currently the highest ranked team the Socceroos will have to face in their ten Third Round games.

As the Third Round is composed of two groups of six teams, who each play home-and-away round-robin matches against all other teams in their group, the Socceroos will play each team in their group twice.

The top two teams from each of the two groups of the AFC World Cup Third Round automatically qualify for the 2022 World Cup in Qatar.  A playoff for the third-placed finishers in both groups also opens a route to next year's event.

After the upcoming Oman and Japan clashes, the Australians are scheduled to meet Saudi Arabia and China for the second time next month.

At present there is no word if the home game against the Saudis on November 11, or any Matildas matches that could be held during their subsequent international window, will be able to take place in Australia. 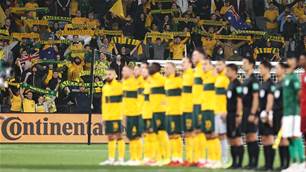