The Socceroos will play in Copa America next year after the invitation from CONMEBOL got the green light from Football Federation Australia and the AFC.

The tournament is moving to a new four year cycle which will see back to back Cops this year and next.

Australia had originally been secretly bidding to host next year's tournament but CONMEBOL decided to share hosting between Argentina and Colombia instead.

But they invited Australia and Qatar to be the guest nations at the 2020 competition – running from June 12 to July 12 – to help make the numbers up to 12 competing countries.

The move had to still be signed off by the AFC to avoid clashing with World Cup qualifiers - but today the approval came through.

Socceroos coach Graham Arnold said the Copa America will provide a further boost to his team as it works through a busy calendar next year.

“The Copa America is a highlight of the football calendar and we can’t wait to get there," he said today.

“We crave these opportunities as players and coaches. The experience we will gain from playing in this tournament will be incredible and I know by speaking to our players, they are equally excited about being part of one of the World’s most prestigious football tournaments.

“Our planning for Qatar has already started. We are building depth amongst our playing group, as evidenced by our performance in Korea Republic last week and playing in this tournament provides another layer of incentive for our players to put themselves up for selection for the national team.

“It will be a big couple of months as we start June next year with World Cup qualifiers and then head straight to the Copa America."

The tournament will feature two groups of six nations. Brazil, Colombia, Ecuador, Peru, Venezuela plus one of the invited nations will be split into one group.

The other group will feature Argentina, Uruguay, Bolivia, Paraguay, Chile and the other invited nation. The top four teams from each group advance to the quarter finals.

FFA Chairman Chris Nikou said this was a huge opportunity for Australian football to showcase its talents on a global stage against some of the best nations in the world.

“We are ecstatic that our Caltex Socceroos will be participating in this prestigious competition for the first time in our history," he said.

“We have been working hard over the last six months to improve our international relationships. This week we held fruitful final discussions with our colleagues at CONMEBOL in Paris and we are delighted we have been able to accept this invitation."

CEO David Gallop, who was also in Paris for the talks, said participation in the tournament will provide a shot in the arm for the national team both on and off the pitch

“The benefits of participating in the tournament are wide ranging," he said.

"Our team will benefit from the experience of testing themselves out against some of the best players in the world.

"On the commercial side, exposing our national team on a global stage has significant upside as well." 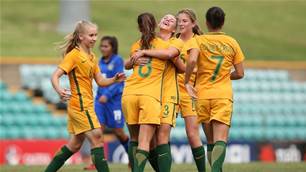