Central Coast Mariners coach Alen Stajcic has labelled Abraham Majok's winner against Hume City as "ugly", but believes his improving side is on the right track and will be competitive in the A-League this season.

The Mariners are through to the FFA Cup semi-finals after knocking off Hume 1-0.

It is only the second time that the Central Coast has ever reached the final four of the Cup.

"I thought the goal was ugly – it's probably one of the ugliest I’ve seen," he said.

"But certainly our play in the front third and in the penalty box needs to improve if we’re going to be competitive in the A-League. Some of the delivery and finishing was poor.

"It just wasn’t clinical enough for this level. But there was a lot of pleasing aspects.

"Hume are a very good team, they're probably the best NPL team in the country in playing out. Their structures and their patterns of pkay are fantastic, so full credit to them.

"They're a great team but I'm really pleased we got through it."

The Mariners have struggled for several years and took out the wooden spoon last season.

But Stajcic feels belief is growing within the club and the signs for the 2019/2020 campaign are good.

"This team is a new team, three quarters of it have been put together," he said.

"This pre-season has been really important, we keep improving every week. There’s so much room for growth. We know the potential of these players... It’s one step at a time, baby steps for us.

"Every win we take, every FFA Cup match and every A-League match and friendly match is important for us to buld the belief and confidence, not only in the playing group but in the staff, in the whole club, in the fans. We want everyone to start believing in this group of players.

"I’ve got a lot of belief that we can be really competitive in the A-League this year and be a serious contender." 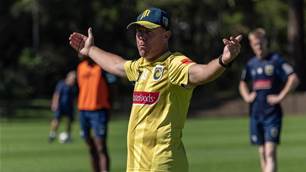