Now in its 15th year, the A-League can at last say youngsters coming through the ranks of club academies are truly playing for their boyhood teams.

Sydney FC’s Marco Tilio and Ben Koop – both goal scorers in the Sky Blues' 5-1 Y-League Grand Final win – served as ball boys for their club, as did Western Sydney Wanderers Daniel Wilmering. Anthony Lesiotis recently explained how it had been his dream to play for Melbourne Victory.

And with the nature of both Australian and global football becoming increasingly transient – nearly 60% of A-League players are set to be out of contract come the end of the 2019/20 season –  the sight of a young player pulling on the shirt that he grew up idolising remains one of the most potent means of endearing both club and player to fan.

As Richard Scudamore said in his visit to Australia last year, “…the holy grail is the local boy made good.”

Now, in what very well could be a first for the club, Melbourne City (née Heart) can lay claim to ‘one of their own’ in their senior ranks proper after upgrading 19-year-old Stefan Colakovski’s contract to a senior deal mid-week.

“My dad knew some of the staff behind the scenes and some of the coaching staff. So that kind of drove us towards Melbourne Heart.

“I was always a member and we always used to go to the post-match functions when Heart used to do it – like at the Collingwood training ground. We used to get photos. I got photos with John Aloisi, Rutger Worm, Alex Terra… all the OGs.

“I think my favourite player was Kliment Taseski when he was there, because was a Maco boy like me. I took a liking to him.

“[Re-signing] was obviously what I wanted. I wanted to stay at the club. As soon as they offered to elevate me to a pro-deal I was rapt that they saw something in me and I took it with both hands.

“The coaches here are unbelievable. I know it sounds cliché, but I literally am learning every day. I’m learning off [Jamie] Maclaren, who is scoring goals for fun.

“I’m not going to complain, I’m going to keep going with it and try to train my best, play my best and do the best I can.” 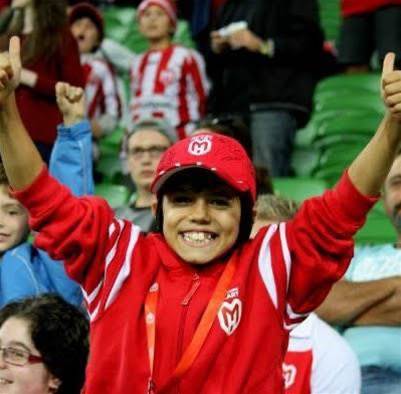 A former junior with NPL Victoria side Pascoe Vale, Colakovski made his senior debut for the artist formerly-known-as-Heart against Wellington Phoenix in round four, coming on for fellow youngster Connor Metcalfe and playing the final 13 minutes in his side’s 3-2 win.

He’s since gone on to make three further appearances for Head Coach Erick Mombaerts’ side, including a 17-minute appearance against Brisbane Roar in round 14 that was promising enough for Herald Sun chief football writer David Davutovic to draw comparisons with Daniel Arzani.

“I’m happy for him to sign this [contract],” Mombaerts said on Friday.

“He has a high level of quality with his strengths. His speed, he is fast, he is a fast player and he can dribble well also.

Making Calakovski’s journey to the first-team and a senior deal even more of an achievement is that the youngster suffered a tear to his ACL in the final game of the 2017 NPL Victoria season, an injury that would put him on the shelf for almost 15 months.

Forced to work his way back up the City academy pecking order as a result, he wasn’t amongst the first round of scholarship recipients ahead of the season – with his academy contract only upgraded to a scholarship following his debut against Wellington.

“There was a lot of times when I was like maybe I need to go elsewhere, because if it’s not going to happen here then I can’t wait around forever,” he recalled.

“I was training with the first team full-time and obviously the scholarship didn’t come around the first time and I was mentally… I wasn’t thinking my future would be here.

“But obviously the scholarship came and from there it just took off. I felt a lot more confident; I felt a bit of security.”