Perth Glory coach Richard Garcia says a rushed warm-up might have been to blame for Daniel Sturridge breaking down in the 1-0 A-League loss to Macarthur.

Sturridge was brought on for the start of the second half on Wednesday, but he lasted just 18 minutes before clutching at his left groin while stretching for the ball.

The injury continued a frustrating time in Australia for the former Liverpool star, who has made just five cameos off the bench in between three separate stints in quarantine.

That wasn't in the plans for @PerthGloryFC and Daniel Sturridge as their star man's night ends after less than 20 minutes on the park.

Sturridge spent 21 months out of the game before making his Glory debut, with his hiatus sparked by a four-month ban for breaching gambling rules.

Even before his betting ban, Sturridge's career had been plagued by injuries.

The 32-year-old now faces another stint on the sidelines, and Garcia is trying to search for answers.

"I keep trying to bring him back and he keeps breaking down," Garcia said.

"We've got to get to grips with it and find out where he's at.

"He keeps getting to certain stages ... we'll have to wait and see how this one turns up. Hopefully it's nothing."

Garcia pondered whether Sturridge's limited time to warm-up at halftime led to the injury.

"We had him in at halftime, and then he did it so quickly that maybe he didn't have enough time to warm up," Garcia said.

"He's disappointed. We've got to take a look at it. Hopefully, it's not as bad as it felt.

"He's a pretty strong guy. He's had these injuries before. It's just about him coming back from it."

The 1-0 loss leaves Glory seven points adrift of the top six, but they've got games in hand on all of their rivals.

Glory will be in action again on Sunday against ladder leaders Western United.

It will be Glory's final game in Tasmania before they return to Perth for a run of games at home. 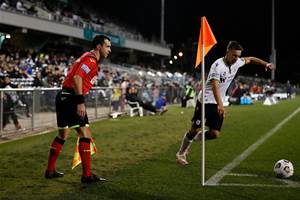 A-League Men refereeing and the role of the VAR have come under the spotlight after two wrong calls, accompanied by big delays, cost Central Coast dearly. 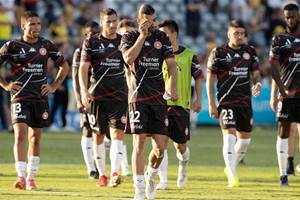