Sydney FC have flown out to China for Tuesday's pre-season clash with star-studded French glamour club Paris St-Germain, but it remains to be seen if they will face Neymar - the world's most expensive player.

PSG will have already played three pre-season games before meeting the Sky Blues, who have had two wins over NPL NSW lower division teams.

Brazilian star Neymar, who was reportedly seeking a move back to his former club Barcelona who he left for PSG in a world record transfer in 2017, didn't play in either of the French club's first two pre-season games.

The club's website reported Neymar and Presnel Kimpembe remained in Shenzhen to follow individualised training programs, while the rest of the PSG squad prepared for Saturday's friendly match against Inter Milan in Macao.

If Neymar does play on Tuesday, he could line up against Sydney's Socceroo fullback Rhyan Grant.

"It would be a good challenge, he's one of he best in the world, one of the most skilful," Grant said on Saturday.

"It would be good to see how I go against him, I'm not expecting too much from myself, but it will be nice to get on the same pitch as him and some of the other players too.

"They are all world class players. To share a pitch with them and see how we go out against them is going to be interesting, but quite fun too I suppose. 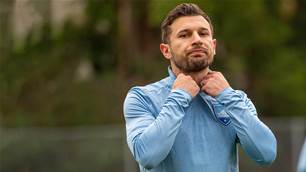