Sydney FC have gone top of the A-League after defeating Wellington Phoenix 2-1 in a pulsating match at Leichhardt Oval.

While chances were a plenty it was by no means an easy task for Sydney FC. Opportunities came and went as the Sky Blues dominated.

Surprisingly, the opening goal came by the way of a scrappy deflection from Brandon O'Neill's strike after some pinball in the box.

Kosta Barbarouses should have put Sydney in front but his guilt edged chance was thwarted by the hand of Stefan Marinovic, with fans arguing the square ball to Le Fondre was the best option.

Down the other end, Ulises Davila had a golden opportunity to square the ledger, but Andrew Redymayne's chest and the post on David Ball's follow-up kept Sydney in front.

Wellington finally made amends with Davila equalising with a smart finish into the bottom right corner with twenty minutes remaining.

Their celebrations were short lived as Sydney FC 'fan favourite' and Socceroos right-back Rhyan Grant popped up with the winner. A beautiful flick at the free-kick saw the ball loop over Marinovic and into the back of the net.

Liberato Cacace's straight red for a horror tackle on Anthony Caceres all but sealed the win for Sydney FC.

He pulled out two spectacular saves in either half, firstly keeping Jaushua Sotirio's header out of the net and stopping Davila's 'clear as day' volley with his chest. Both, arguably, should have been goals.

His engine never runs out. There is a good partnership developing between the right triangle of Grant, Luke Brattan and Alex Baumjohann. He showed terrific technique to loop Marinovic from O'Neill's free-kick to send Sydney in front.

There were some shaky moments for McGowan when he was playing out but overall a decent performance after his match-winner last weekend. 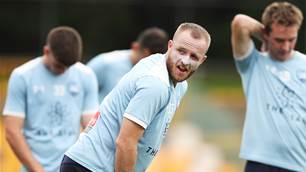 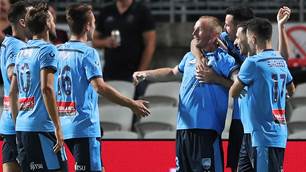 'We did it in style...' - Rhino charges home as Sydney end winless run 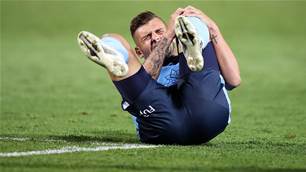