After three weeks on the sidelines, Sydney FC right-back Rhyan Grant is chomping at the bit to face Melbourne Victory their A-League clash at AAMI Park.

Grant received a three-match suspension - reduced to two games on appeal - for a red-card tackle on Melbourne City's Nathaniel Atkinson, then had another week off due to Sydney FC's bye round.

The Socceroo said he'd taken the opportunity to rest, but also work through some tougher training sessions, with the Sky Blues kicking off their Asian Champions League campaign next month.

"Obviously not what I was after but copped the suspension on the chin and had a couple of weeks off to maybe refresh and use it as a time to get the body right," Grant said.

"But in saying that, we still trained very hard and I still had to come in most days like the team.

"So it was business as usual just without playing the games - so happy to be back and pretty keen for it."

Victory have had a season to forget so far, with coach Marco Kurz sacked last week, but enjoyed their first win under caretaker coach Carlos Salvachua last night, thumping Bali United 5-0 in their ACL playoff match.

"They've had a game last night and they looked good and they've got a few players back so we're always going to be wary of them," Grant said of Friday night's clash.

"But at the same time we're always quietly confident whoever we play but we know it's going to be a tough game and we're looking forward to it." 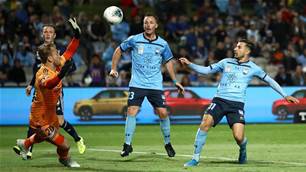