Adam Taggart looked like he was carrying the world on his shoulders ahead of a huge match against A-league leaders Perth Glory on Sunday.

A lot has happened since the striker controversially left WA for Queensland and the chance to play under former Socceroo and World Cup hero John Aloisi.

Aloisi has quit, Roar are languishing near the bottom of the table and Glory – under new coach Tony Popovic – are setting the pace for the rest of the league.

Taggart is currently second on the goal scoring chart with seven from 11 appearances but agrees with teammate Eric Bautheac that the players let Aloisi down.

“As individuals we weren’t performing as well as what we could be,” he said.

“It’s obviously hard to talk for everyone but you know, myself, I’ve definitely not been playing the sort of football that I know I can this year and I’m sure everyone would probably say the same about themselves.

“It’s been a difficult period and I think for John, who worked really hard for us, it was disappointing on our behalf to have not been able to do more for him to stick around.”

Roar stopped the rot with a 2-2 away draw against Newcastle Jets last round, ending a five-game losing streak.

The Queenslanders showed plenty of grit coming back twice through Taggart and Bautheac to earn the point but according to the striker there’s been no departure from the Aloisi mantra under caretaker coach Darren Davis.

“Obviously Darren’s worked with John all pre-season, so he’s continued a lot of the things we’ve been working on,” Taggart said.

“Those sort of goals, not just my one – Eric’s and also Matt’s (McKay) goal against Sydney FC – are the sort of thing we worked on all pre-season.

“So it’s nice for those sort of goals to be paying off and obviously helping us get the point on the weekend."

But he said "it’s hard to say anything has changed".

“Obviously a few more young boys have come in and probably helped lift the squad I think. All of them have been really good so far.

“(But) the way we want to play is exactly the same. Coming second bottom there comes the point where there’s not much to lose.

“People start to play with a bit more freedom and that’s probably what everyone can see. People probably feel like there’s a bit less pressure obviously being second bottom. No one’s giving us much of a chance at the moment.”

Despite his subdued demeanour, Taggart said he was looking forward to Sunday’s clash and the quick turnaround.

“I’m really happy with the three day turnaround and a massive opportunity for us,” he said.

“Perth have everything to lose being top of the league and performing really really well – and us obviously at the other end. I think it’s a good opportunity for all of us to really help kick on from a good couple of team performances.” 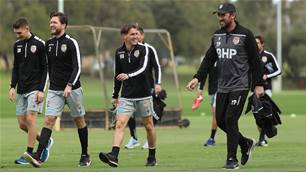