He's a globetrotting teenager with an Eton College education who came through Chelsea's academy, now Taiwan's Will Donkin can't wait to play the Socceroos.

Signed by the Blues when he was 11, Donkin made his international debut for Taiwan as a 16-year-old when then-coach Gary White tracked him down.

"When I first got the call I was thinking maybe for under-19s or something like that but then he just said 'we've got an Asian Cup qualifier in three weeks' and he wanted me out there at the training camp with the senior side," Donkin revealed.

"To start playing senior international football at 16 I thought was a really good opportunity and experience."

Donkin qualifies to play for Taiwan through his mother, who met his English father when the pair were working for the same firm in Hong Kong.

The teenager recently added to his globetrotting background by leaving his south-London base and Crystal Palace's youth set-up to join Norwegian club Stabaek.

Since his national team debut in 2017, the attacking midfielder has made 16 appearances for Taiwan but Tuesday's game against the Socceroos is the biggest he's been a part of.

"It's going to be a top side, playing against some Premier League players, Bundesliga players, players who are playing in the top leagues in Europe," he said.

"The kind of leagues in a few years I want to try and be playing in as well.

"I think it's going to be a really good test and really looking forward to it." 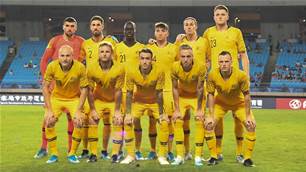