Rising star Wellington Phoenix coach Ufuk Talay has pledged his future to the Kiwi club after reportedly knocking back interest from Melbourne Victory.

Talay's side were narrowly done away with by an experienced Perth Glory outfit in the A-League's first elimination final, despite bossing possession and creating several chances.

”Football’s a cruel game sometimes,” Talay told Stuff. “You dominate the game, create enough opportunities to win and it’s been a recurring theme from the last game against Newcastle.

“Not having Hoops there does hurt us but I think the players have got the ability to do it, and unfortunately the last couple of games we didn’t do it, and we didn’t do it tonight and that’s why we walk away with a 1-0 loss.”

It's still a huge accomplishment from Talay, who guided Wellington to their highest A-League finish and only two points shy of their record points result, with a game less played.

“I’m still very proud of the boys,” Talay said. “It’s been a great experience for our younger players to play in these games. The more they play in these finals series the more accustomed they get to it and the better experience they get from it.

“I’ve thoroughly enjoyed it. We had a great bunch of boys, we started off on the back foot and the belief was there and the process was there, and it got us to where we finished, third on the table. 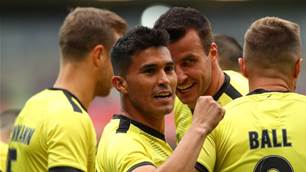