Steven Taylor says Wellington striker signing David Ball's hard yards in the lower tiers of English soccer have him primed to be an A-League force.

The Premier League veteran hit back at suggestions the English striker lacks the quality to match the deeds of last season's prolific Wellington Phoenix front line.

Ball has scored just 13 goals in 69 games over the past couple of years while at Rotherham United and Bradford City, sparking the concerns of critics. Previously, he found the net 41 times in 179 games over five years with Fleetwood Town.

"It's a difficult league, when you see the defenders he's playing against and the pressure that's put on, playing game after game," Taylor said.

"He's played 50-odd games a season and he's a very fit lad. I told him 'you come here and play, you'll have plenty of time to recover.'

"He had a lot of offers back in England and he still wanted somewhere that was going to test him out. He's very talked-about back home. The fans will love him."

Mexican attacking midfielder Ulises Davila is set to take Singh's playmaking duties and Taylor believes 29-year-old Ball is an excellent acquisition up front, having played more than 350 games in England from the second to the fourth tier.

Taylor's 13-season career at Newcastle United was mostly in the English Premier League but before joining Wellington, he battled through what he said was a taxing season with League One Peterborough United.

"It's a new era in Wellington, I enjoyed last year, I can't wait for this year to get going," Taylor said.

The Englishman played down suggestions he will soon be unveiled as captain to replace long-serving skipper Andrew Durante. 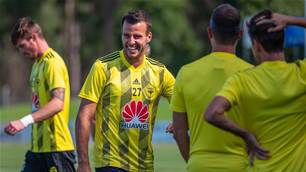