The all important lessons that have been learnt after every team's opening matches... 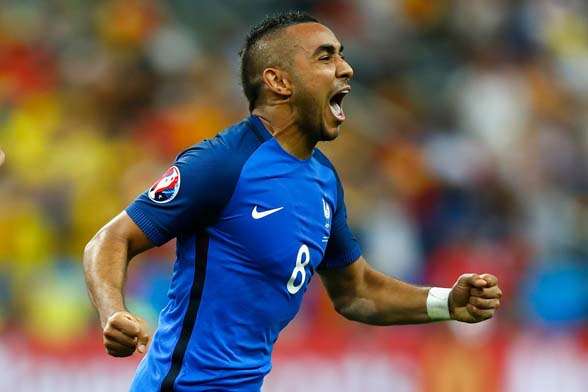 Dimitri Payet saves the day for the French. (Photo by Getty Images)

France got the all important win in their opening match against Romania. With a lot of hype surrounding Les Bleus, much was expected in their first competitive game for two years, yet France were disappointing.

It was clear that nerves got the best of the French except for Premier League duo Dimitri Payet and N'Golo Kante as well as injury replacement Adil Rami, all three who weren't even anywhere near the side a year ago, the latter over a fortnight ago. If the French really want to go far and win the tournament, they'll need to stay calm and focus on the task. 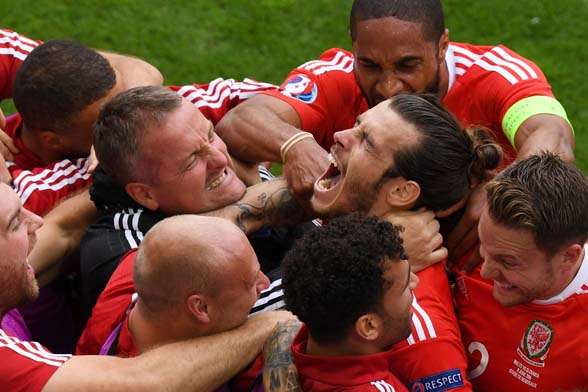 The King of Wales, Gareth Bale. (Photo by Getty Images)

Even with players like Aaron Ramsey, Joe Allen and Ben Davies, Wales look nothing special when Gareth Bale isn't apart of the equation. Add him in and Wales look like a team that can hold their own and even nab a result against anyone on their day. In their first ever European Championships and major tournament since the 1958 World Cup, a cracking Bale free-kick helped guide his side to a vital first win.

Though respect has to be given to Chris Coleman and his troops who play a solid defensive, counter-attacking style of football that has helped turn the fortunes around for the Welsh and complements Bale rather than have it solely rely on the Real Madrid forward.

3) Football was taken back to the dark ages 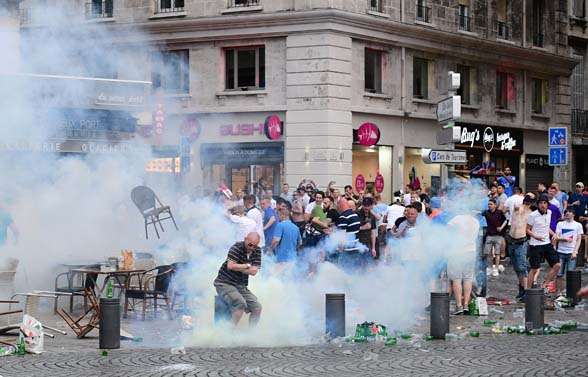 Not a good sight for the international game. (Photo by Getty Images)

Disappointing scenes from English and Russian fans has put a large damper on the Euro celebrations. Violent scenes in the city that lasted three days as well as anti-social behaviour in Stade Velodrome during the match between the two sides made UEFA stamp their authority.

A suspended disqualification and a €150,000 fine was handed to the Russians by the Uefa disciplinary committee, which only rules on incidents inside the stadium. The English FA were not charged for misdemeanors inside the stadium but stated their "disgust" at the actions of the English fans. UEFA have stated that if there is any repeat, they aren't afraid to impose further, harsher sanctions on either of the two. 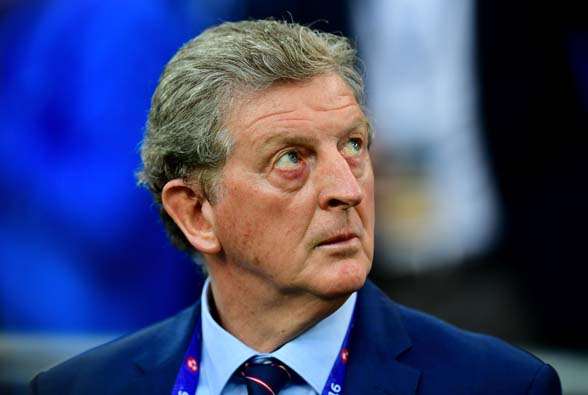 The Questionable One. (Photo by Getty Images)

With five strikers picked and one natural winger it's crazy to think that Roy Hodgson would base his tactical "genius" on a standard 4-3-3. You'd also think that having the two leading goalscorers over the last Premier League campaign with a combined 41 goals would lead the line. You might also ponder that the EPL player of the year would get a start, and that a 6'2" goal scoring threat wouldn't take corners.

Well the man that guided England to rock bottom at the World Cup two years ago is at it again.

Even though England looked good in patches against Russia there were so many questions rather than answers after the game. Why did Vardy not get on? Why didn't Kane come off? Why did England try and hold onto their lead with a fair amount of time left?

With a squad littered with exciting new talent, Hodgson seems like he isn't the right man for the job. Just a few weeks ago there was fury over Danny Drinkwater's axing and Jack Wilshere's inclusion, even Fabian Delph is the first reserve ahead of the Leicester title winner! 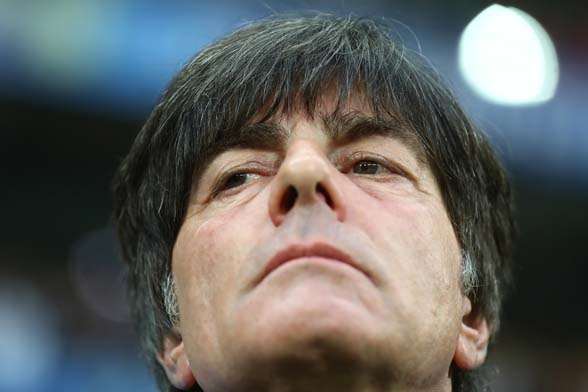 Joachim Loew, his mastermind brain and his infamous nsoe. (Photo by Getty Images)

German fans are thanking the football gods that Joachim Loew ditched the five at the back experiment, but maybe not his infamous scratch and sniff of his southern hemisphere. Germany haven't continued the progress that was thought upon them after their World Cup triumph.

Trying to transition in a new system without the likes of Philipp Lahm Miroslav Klose and Per Mertesacker was always going to be a tough ask but two years on, with lessons learnt, Germany looked good when it mattered against the Ukraine.

Fine goalkeeping from Manuel Neuer and impressive defensive efforts led by Jerome Boateng prevented Ukraine take a three goal lead at half time, but Germany took control in the second period and ran out the game.

If Loew keeps the 4-3-3 in place, German fans won't care for whatever Loew decides to sniff next. Maybe he ate lavender and enjoys the scent?

6) Poland and Croatia are ready to take on anyone 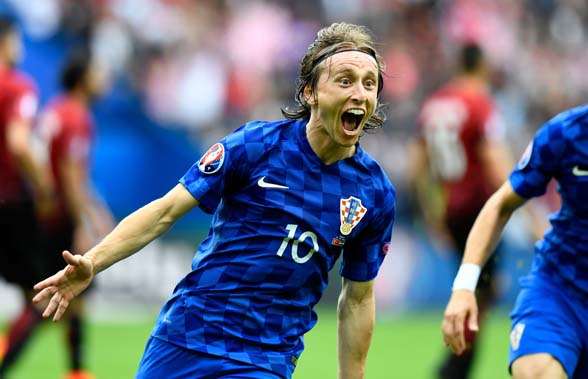 Dark horses or genuine contenders? With pre-tournament favorites failing to stamp their authority on the competition both these sides produced dominating displays in their opening group games despite only winning their respective matches by the solitary goal.

If both sides can find their scoring boots there is no doubt they will be a danger for any side when the tournament heads into the knockout stage especially when they are being led by some of the best players in the world. 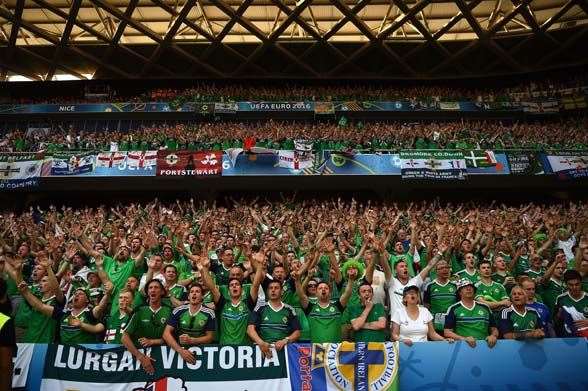 The majority of fans in France are there for a good time. (Photo by Getty Images)

It wasn’t all hooligans and thugs that attended the first round of matches in France. Whilst all the attention seems to be fixated on the violent scenes in Marseille, many seem to have forgotten the majority of fans who provided the colour and atmosphere that only can be generated through the round ball game. Take the Northern Irish for example they are just more than happy … happy to even be at the tournament. 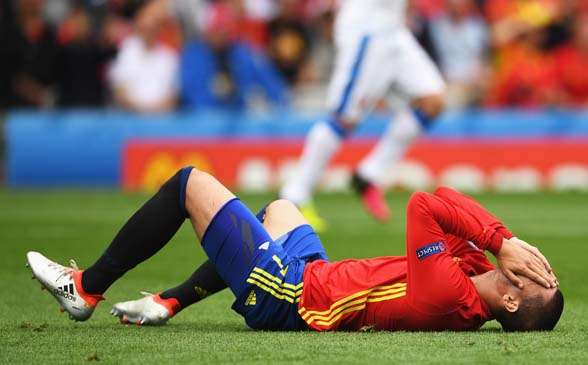 Alvaro Morata struggled to make the most of his opportunities against Czech Republic. (Photo by Getty Images)
Predictable, frustrating, boring, annoying …. Gone are the years of when La Roja were an out of this universe force that everybody feared and nobody knew how to stop. Whilst they still produced a dominant display and got a late winner against the Czech’s, riding on Andres Iniesta’s magic, they failed to produce in the final third, scuppering chance after chance.

Maybe on another day Spain will bury those chances but they are still lacking a striker on the same level as the players in other areas of the field. With Alvaro Morata expected to lead the line for the next decade, it’s now his time to shine and show what Spanish fans can expect for the future. 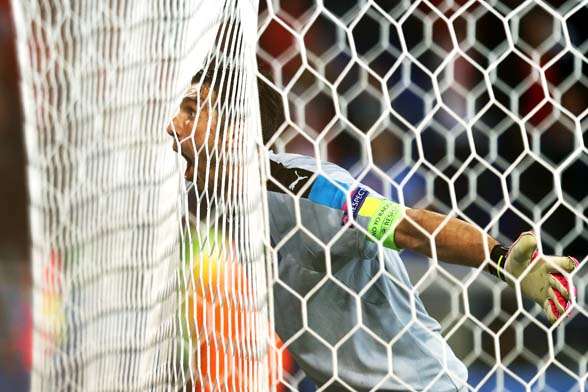 Sir Alex Ferguson famously once said ‘It is defenders not strikers who win Championships”. With a defensive spine led by the brick wall of Giorgio Chiellini, Leonardo Bonucci, Andrea Barzagli and goalkeeper Gianluigi Buffon, Italy proved to Belgium that their defensive prowess was able to trump their flamboyant forwards.

They might not have forwards like of eras past but their defence is as golden as ever. 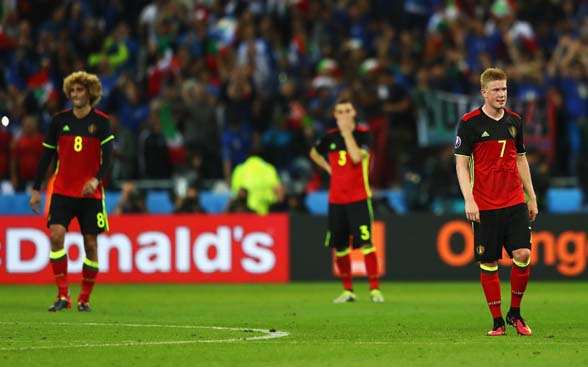 Kevin De Bruyne, one of the Belgian superstars who went missing against Italy. (Photo by Getty Images)

In an unfamiliar position of being tagged as one of the contenders to win the entire tournament, Belgium looked far from it in their opening match against Italy. A golden generation looked very rusty as their superstars failed to contribute anything meaningful.

It's only been one match and there's a long way to go but Marc Wilmots has to find a formula that works rather than trying to fit superstars into a starting XI.