Axed Western Sydney Wanderers coach Markus Babbel has released an incredible video on the day of his sacking, thanking everyone in the Australian football community for his time in the A-League.

Despite the axe fallling midway through his second season on a three year contract, Babbel filmed a special heartfelt message for fans, players, management and media.

He paid tribute to the 'amazing' Wanderers fans and encouraged them to stick by the club, saying the past two years had been the best time of his life.

"It was a pleasure from the first day until the end. You do an amazing job, you support the team and you have to understand this is still a young club, there's a lot of improvement what the club has to go but support them," he said to fans.

"The club is top and especially you are top because you make this club special. I enjoyed every single home game because you were amazing and keep going with it, because I still believe this team can do something special but they need the 12th man.

"The team has the quality to beat every single team in this division but they need your help. From my side thank you so much for everything ... I will miss you." 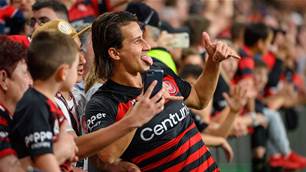