Every A-League round, we hand out our FTBL awards for the brilliant, bad and bizarre moments each week. In round 12, one team announced themselves as favourites for the championship, one player almost marred a crucial victory, whilst another preserved a win in rather spectacular fashion.

Despite losing 2-0 away to Melbourne City on Monday night, Alen Stajcic still claimed post-match that the Mariners were the competition's benchmark at the moment.

The way the rest of the week played out seemed to slowly derail that statement, particularly when City thumped the Wanderers 4-1 on Friday night.

Patrick Kisnorbo's side is playing very close to their full potential at the moment, and the way they put their foot down on Friday after going behind was ruthless.

After narrowly missing out last year, City should be targeting a maiden championship.

Given the sense of inevitability around their games, they are the favourites right now.

They have the best and most in-form attacking trio in the league. Craig Noone and Andrew Nabbout are now lifting their game to help out the ever-evolving Jamie Maclaren.

If you win a couple of games in a row by a comfortable margin, that is a purple patch.

But if you win six straight games by an aggregate score of 20-3, that signals something far more prominent.

That is a benchmark.

Elvis Kamsoba was the latest victim of a "peak A-League" moment on Wednesday night, as he hobbled off injured after scoring a consolation for Grant Brebner's side in their 4-1 defeat.

The moment summed up another disastrous display from the Victory, with Kamsoba netting a rare goal in his underwhelming Victory career so far.

As Brenton Speed exclaimed: "Welcome to peak A-League!" (potentially killing off the meme forever though).

For those unaware, "peak A-League" is often used to describe bizarre or rather unfortunate events in the competition, given the often quirky history the league prides itself on.

We're pretty confident we'll see another one of these before the season's end too.

Melbourne Victory faired much better on Saturday night, though, when they earned a decent point away to the Mariners.

However, the way the game played out highlighted the difference in mentality between the two clubs at the moment.

Heading into the game, the Mariners were the rising underdogs. They had come from nowhere to sit on top, coming up against the fallen giant of Victory, who is bottom.

Victory's opener came against the run of play, and after Marcos Ureña equalised, there looked to be only one winner.

The Mariners were on top in the second half, highlighting the different confidence levels at both clubs.

Stajcic's side is flying and came out of it disappointed not to win, even though they would have taken a result like this in recent years.

Conversely, Brebner's side were relieved with a point in a fixture THEY usually would have won comfortably in previous years.

This game really is speaking volumes of the difference in mentality between these two clubs at the moment. @CCMariners are chasing a winner, high on confidence, whilst @gomvfc are settling for a point and time wasting. #CCMvMVC #ALeague #FPFootball

This award goes to Jonathan Aspro for his silly red card in Perth's win over Newcastle.

The centre-back received a second yellow on the stroke of halftime after hauling down Ramy Najjarine on the edge of the area.

The most frustrated person would have been Richard Garcia. He was very comfortable up until that point, with the Glory coasting at 2-0.

Absolute coach killer for Richard Garcia. Fully in control of the game too. #PERvNEW #ALeague #FPFootball

They were well on course to snap a five-game winless run and ultimately still did, but had to cling on in the second half as a result of the red.

Welcome to the A-League, Joe Gauci.

The 20-year-old has deputised brilliantly in place of James Delianov in recent weeks. His save at the death against Sydney's Patrick Wood on Sunday was a contender for the best this season.

Gauci flung his right arm up to parry a bullet header from point-blank range over the crossbar.

His teammates immediately praised him, and the moment sent Australian football's social media scene into a frenzy.

🗣️ "These are the moments you dream of as an Adelaide boy."

Joe Gauci is enjoying playing in front of friends and family.#AUFC #ALeague pic.twitter.com/IqZ8IF1pVu

That save only happens because of the various reaction training drills that most goalkeepers do. Gauci seemed to know when to put his arm in the air from muscle memory.

The other reason the save was so impressive - as Carl Veart pointed out afterwards - is that Gauci was largely untested during the game but kept his concentration levels when it mattered.

That he did, and minutes later, the Adelaide boy stood up again to claim a dangerous cross and preserve the three points for the Reds.

The city of churches has produced another hot prospect. Delianov now has his number one spot being challenged by another exciting young keeper. 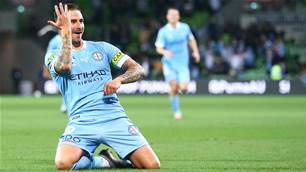 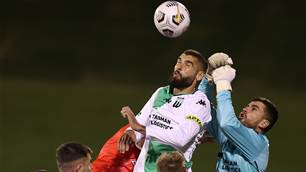 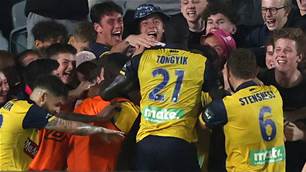