Macarthur have fought back from a goal down to beat Melbourne Victory 2-1 and snap a five-game winless run.

Melbourne Victory have been left to rue their wastefulness after letting a one-goal lead slip in their 2-1 defeat to A-League newcomers Macarthur.

But when scores were 1-1, Victory spurned four chances in as many minutes - to Robbie Kruse in the 39th minute, Rudy Gestede in the 40th and 41st and Kamsoba in the 42nd - and from there Macarthur found a way to win.

"If we got a point, I would have been disappointed. Not to get anything is bitterly disappointing," interim coach Steve Kean said.

"Because I think the first half's probably the best we've played the last few matches as far as creating chances (goes).

"The disappointing thing is we never took them because the game in all honesty should've been finished at half-time."

Victory snatched the advantage when Jacob Butterfield played a long cross-field ball to Gestede, who flicked on a header to the feet of Kamsoba.

The winger charged forward and cracked a powerful strike past an outstretched Adam Federici and into the opposite top corner.

Benat pinched the ball off Jake Brimmer and slipped through Susaeta, whose shot deflected off Nick Ansell and nestled in the Victory goal.

Just before half-time, Brimmer smacked a free kick off the crossbar with referee Chris Beath waving away Victory's appeals for a handball in the aftermath.

Macarthur skipper and former Victory captain Mark Milligan drew attention when he was caught on camera just before a half-time interview, appearing to yell down the tunnel at Gestede that he was "the worst striker to play for Melbourne Victory".

"To each their own opinion," Kean said. "For us, since (Gestede's) been here when we've managed to get him on the pitch he's been effective."

Macarthur had Jake McGing's 54th-minute strike at a corner chalked off by VAR for a Meredith handball in the build-up but 15 minutes later Meredith met Benat's cross with the winning header at the back post.

"Particularly first half we struggled with certain parts of the game," Bulls coach Ante Milicic said.

"But to go a goal down and then to come back from that and to get three points against a difficult opponent is pleasing."

Victory face a tight turnaround to Sunday's game against the Glory in Perth.

Brandon Lauton (groin) limped off in the 66th minute but Ben Folami (groin) and Storm Roux (suspension) should return. 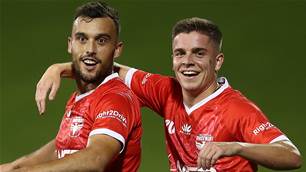 'We made some terrible decisions' - Phoenix ramp up pressure on Victory