The Englishman played in the Premier League and English Championship for several clubs including Stoke City, Derby County, Birmingham City and Middlesbrough - where he played alongside new Victory striker Rudy Gestede.

"After speaking with Grant Brebner, he outlined a very clear vision about the football he wants the team and myself to play, so that made the decision to come to Victory very easy," Shotton said.

"I've obviously played with Rudy Gestede as well, so I'm looking forward to linking up with him and all my new teammates."

"Ryan has performed and competed in the toughest league in the world, the English Premier League," Brebner said.

"He brings a wealth of experience to our group, is a fierce competitor and will also help mentor our emerging players, in particular defenders Aaron Anderson and Dylan Ryan.

"While Ryan has made a career playing in defence, given his height and strength in the air he can push forward for set pieces and is a real threat around goal.

"The signing of Ryan completes our squad for the upcoming season and we're really pleased with the team we've assembled.

Shotton will complete hotel quarantine then join his Victory teammates.

The majority of the Victory squad are currently quarantining in Sydney until December 22, following their Asian Champions League campaign in Qatar. 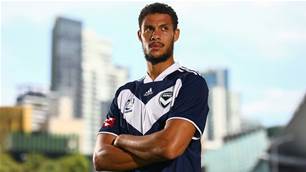