Adam Taggart finished 2019 as winner of the K-League golden boot and with his first piece of silverware in his hands. But how does Taggart's incredible free-scoring year stack up against Socceroos greats before him?

Taggart's 2019 rise is a mix of an incredible realisation of his talent and putting to bed his profligacy in front of goal.

In the space of 12 months he battled injuries and sat on the bench at struggling Perth Glory to being the Socceroos starting centre-forward in a critical World Cup Qualifying campaign.

Socceroos fans are beginning to sit safe in the knowledge that they may have a striker that they can rely on, at least for the medium term.

In total, the 26-year old played 52 matches for Brisbane Roar, Suwon Bluewings and the Australian National Team in the calendar year scoring 29 goals and assisting another seven.

Taggart had a goal contribution every 104 minutes this year where he scored two goals or more in five matches.

His favourite teams to come up against were that of his fellow countrymen. The former Brisbane Roar man scored five goals in four games against Rashid Mahazi's Incheon United and four goals in three games against Aleksander Jovanovic's Jeju United.

But where does Taggart's goal scoring exploits rank him against former Socceroos strikers?

A direct comparison in the field of Asian football throws forward a contest with Josh Kennedy. The towering striker had a slightly better goal ratio, winning the J-League golden boot with Nagoya Grampus in 2011 with 19 goals in 31 games.

What about in Europe? It's almost criminal to mention him in the same sentence, but Mark Viduka had exactly the same goal scoring stats in one of his best seasons at Leeds United in 2002/03.

Viduka scored 20 goals in 33 English Premier League matches, the same amount of goals and games as Taggart this season.

One last comparison from Europe shows his Socceroos boss Graham Arnold show off his talent when he averaged just over a goal every other game in 1995 for NAC Breda in the Netherlands, scoring 16 goals in 30 games.

Taggart still has much to learn as he continues to find his feet on the international stage. Goals against Chinese Taipei are important to settle in but when it comes time to face teams like Japan and Saudi Arabia to qualify, that'll be the true test of his capabilities.

Hopefully he continues to dominate in Korea and, together with Jamie Maclaren, Arnie can start to sleep easier over Socceroo striking stocks. 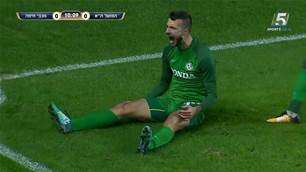