WE follow the fortunes of one young club in their search for silverware as football academies come under the microscope...

It's a hot and humid January night as the boys from South Australia’s Football Focus academy trudge from the field feeling dejected after their opening Valentine Cup loss to Liverpool Olympic.

Just one day previous the squad of 9-12 year olds couldn’t contain their excitement as they touched down in Sydney for the very first time to compete at Football NSW HQ in only their second ever tournament.

Through word of mouth they came recommended then invited as the only team from outside NSW to take part in the competition after winning the Cross Border Challenge in SA during October.

As they passed through the big city and over the Harbour Bridge, the reality of being in Sydney hit home as they made the forty minute drive to their apartments that would become the base for their cup assault.

Not much was known of the opposition apart from the fact that most of the teams competing were undefeated including the mighty Liverpool Olympic who they would meet in the opening fixture. It proved a step too far however on this occasion as the team went down 2-1.

The preparation hadn’t been ideal, the players and their parents arrived on different flights at different times with the initial excitement keeping the youngsters up past midnight ahead of match one.

Now 24 hours later, Football Focus ‘Director of Football’ Jason Hayhurst sits with the players after that first game to discuss what went wrong and how to approach the next match. They end the discussion concluding the busy day and late night had a large part to play in the result.

Starting tonight the squad agrees on early nights and complete focus and determination for the rest of the tournament showing a mature approach beyond their years.

Next up is Glenwood Redbacks and an improved performance sees the team come out of the game with a 1-1 draw. Although it’s a step in the right direction the players again assess their own game and decide they haven’t quite reached their optimum level. 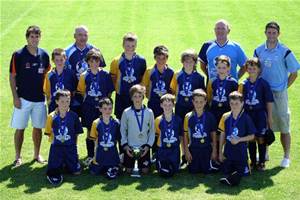 They go on to record wins against Winston Hills (3-2) and Roseland Raptors (5-0) sending themselves into the final to face their first round conqueror’s in a much anticipated rematch.

Although anxious coming up against an undefeated Liverpool Olympic, Football Focus are keen to put things right and march onto the field determined to match their opponents and steal the win.

By the time of the final the once pro-Sydney crowd gathered at the ground are cheering the boys from South Australia impressed by their work rate and determination to not only turn results around but the hearts and minds of those who doubted.

Jason’s rotation policy of the thirteen squad members is tested to the full in a tough final encounter. The defence holds strong to keep a clean sheet and the once impenetrable Liverpool Olympic defence is broken down empathically in a 3-0 victory.

Unlike two nights earlier the team leaves the field elated to celebrate with their parents and the on looking Sydney FC players there to shake their hands and present the trophy.

“The team put in a first class effort showing their true passion, commitment and desire to achieve, to triumph victorious over the four local teams,” said Jason. “Nine of the thirteen players contributed to the (overall) goal score”.

Despite the obvious ambition to compete interstate this trip was much more to the youngsters than one football tournament. They also had the opportunity to experience what it was like for a professional team on the road, relaxing by the pool, sight seeing around Sydney and generally bonding with their team mates.

So too for the parents as they interacted amongst themselves and the team to get a further understanding of what this funny old game is about and what their sons hope to achieve within the sport.

To top off the trip the entire squad met a number of other Sydney FC players at the airport including World Cup winner Juninho, striker Alex Brosque and Robbie Middleby who was also on hand for the final.

Securing the Valentine Cup represented only the second successive win for the side after they swept aside two local SA teams and the visiting Boxhill squad from Melbourne, Victoria in the Cross Border tournament held in Adelaide last year.

It was at that competition the Elite Squad first came together to compete as a team providing a huge learning opportunity for them to adapt their individual skill training into a competitive match environment.

The initial idea behind an Elite training squad was to give players excelling for their clubs a chance to progress further by testing themselves at a higher level.

Football Focus Elite Squad participation is by invitation only with a maximum of 16 players per squad being selected from the Football Focus Professional Squads or from talent scouting at matches and tournaments.

“Our 2007 Squads have seen tremendous growth, more than doubling on the previous year,” said Jason.

“We plan to run two Elite Squads this year compared with one last year. The Development Squad will be offered during the season this year for the first time to help school players make the transition to club football and we hope to run a dedicated Girls Only Squad in 2008.”

From here Football Focus, with the future endorsement of Football Federation SA (FFSA), also hopes to provide the state body with a better standard of player for their Development Squads aged 13 and above.

So far six boys have played in the State Talent Identification Championships in various age groups and Jason himself has been selected by the FFSA as coach for these championships two years in succession.

“For the future we’ll look for endorsement from the FFSA, as a private academy working with the federation, to progress the development of our younger players,” added Jason.

“This can only benefit the growth of talent in the junior leagues who are after all Australia’s players of the future.”

The academy has also opened up pathways and progression opportunities with Dutch giants PSV Eindhoven and Feyenoord along side Premier Leagues clubs Aston Villa and Bolton.

“Should any of our Elite players show the potential to go to the top, it is our intention to make this happen,” said Jason.

Football Focus has been at the forefront of junior development in South Australia for the past three years offering vital coaching and community activities across the Adelaide metropolitan area.

The overall aim of the academy is to “close the gap between school and club football, by giving all players the opportunity of progression regardless of ability.”

Established in October 2005, the venture originally started in a part time capacity by Jason Hayhurst, before going full time in May 2006.

Certified by the English FA and Football Federation Australia with an Asian football license due to be completed in the near future, Jason has 20 years experience coaching 7-16 year olds.

Alongside the Elite Squad, Football Focus and its team of coaches run Development and Professional Squads to enhance the skills of those kids looking to improve with a view to playing local club football.

“There are an awful lot of kids involved with local clubs that have been turned down year after year at tryouts. So the Development Squad has been put in place to help them get into club football.”

“Professional Squads only run from September to February and that’s because it’s the close season. That’s aimed at club players who want to enhance their skills or keep their skills going over the off season.”

With the assistance already received from FFA Technical Director Rob Baan in setting up the overseas pathways and the potential endorsement from FFSA, the future of Football Focus looks bright.

Several new programs will run throughout 2008 involving kids of varying skill levels with during and after school activities, girls only squads, private coaching, junior coach development and the hosting social events or tournaments with the giant inflatable pitch.

The management of the Elite Squad however will under go a minor change to allow the maximum number of players to get involved at different age groups.

“This year we will start in February with a forty week program and we’re splitting them up. So we’re going to run a 9-11 and 12-14 age group,” said Jason.

As yet no tournaments are slated in for this year but if the Valentine Cup squad is anything to go by both teams will prove formidable opposition throughout 2008.