Bradden Inman has revealed special finishing sessions with Robbie Fowler and a change in his mentality is the secret behind his hot goal-scoring form.

Inman has bagged two goals in his past two games for Brisbane Roar.

He scored the equaliser in a 1-1 draw with Newcastle Jets late last month, grabbing a wonder goal for his first strike in the A-League.

The number 10 backed it up a few days later with the winner in a 2-1 victory over Western Sydney Wanderers, in what was another spectacular effort.

"I don’t know, I’m just trying to believe in my ability more," he explained.

"I’m taking more risks and it’s paid off. Working under the gaffer and he’s been telling me and helping me with finishing sessions. I’m just backing myself more in front of goal.

"I hope I score a lot more, just finding a bit more form."

The Roar came from a goal behind to beat the Wanderers, thanks to goals from Scott Neville and Inman.

"It was good to finally get our first away win," the attacking midfielder said.

"We’re just trying to get a bit of form."

Brisbane had a slow start to the season but the win has pushed them up to ninth on the ladder and only three points from a place in the top six.

After a complete squad overhaul under Fowler in pre-season, Inman believes the team is starting to gel.

"I feel like we have been playing well but just not getting results. We’ve picked up four points from our last six and we look to push on from now." 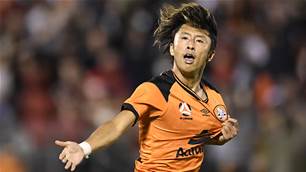